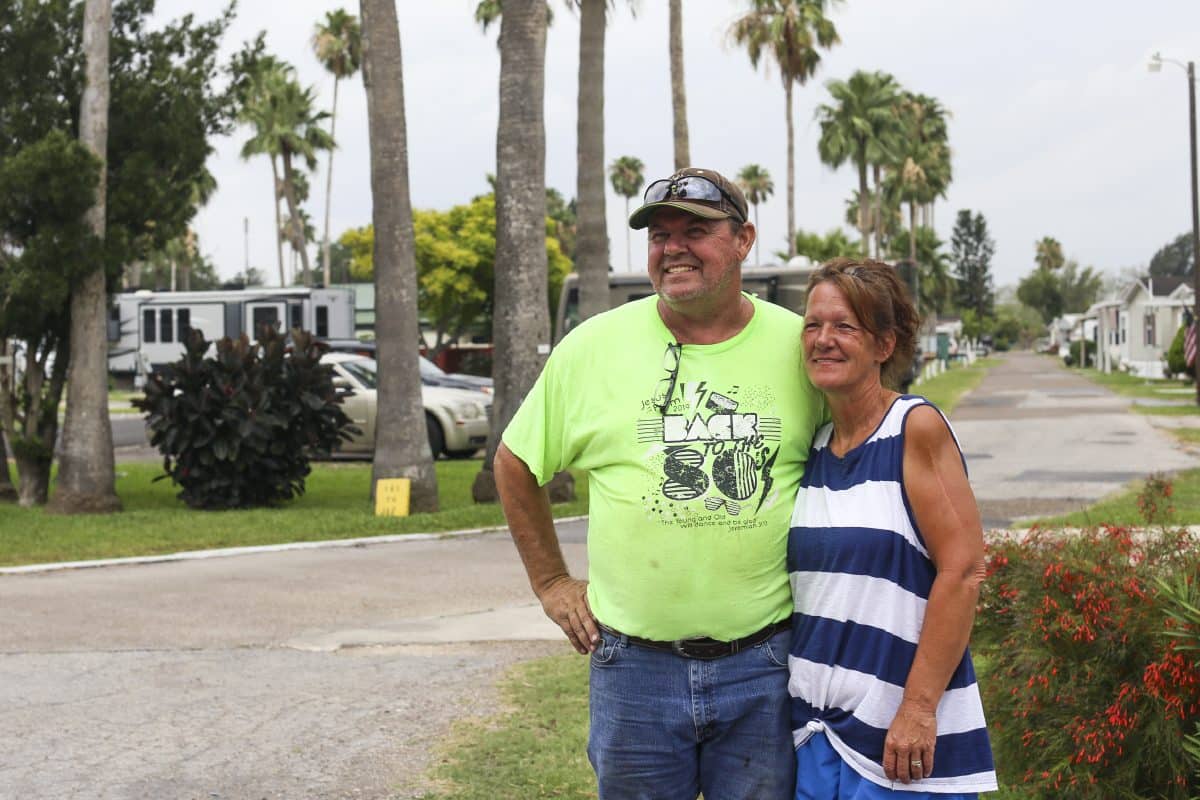 Co-chaplains Scotty and Melanie Wilson stand together Thursday (May 21) in Sunset Acres RV and Mobile Home Park. The couple has been facilitating donation challenges for the residents of Sunset Palms RV and Mobile Home Park and Breeze Lake Campgrounds to help provide for the homeless and in need throughout the year. (Denise Cathey/The Brownsville Herald)

Organized staff and residents of the Sunset Palms RV & Mobile Home Park and Breeze Lake Campground in Brownsville, Texas, have been setting an example for the community by coordinating a series of regular donations to the Ozanam Center, a shelter serving refugees, asylum seekers, and the homeless located just in-between the two properties on the North end of town, according to the Valley Star.

The campground’s co-chaplain Melanie Wilson serves the population of locals and Winter Texans who call the two parks home, though they’re open for camping year-round. She and co-chaplain Scotty were placed at the parks by Christian Resort Ministries.

Wilson said the parks’ owners, Kevin and Nancy Richardson, have placed a huge emphasis on paying forward the community’s resources. Holiday parties organized both by and for residents originally sparked the initiatives. Ozanam Center’s close location made it the ideal place to give unused ingredients, leftovers, and more.

As the park serves Winter Texans, clothes donated when visitors travel north are passed on to the shelter in bulk. Wilson called the drive a “chaplain’s challenge.” “This month, the challenge is to collect towels and wash rags. All month long we put a container in the rec halls and people bring items in,” she said.

Terry Kerns, a member of the Sunset Palms office staff, chimed in, “We’re very competitive.” She added that the last drive resulted in two trucks and a van loaded with food to bring to Ozanam. Wilson said the community has chosen to direct their resources at Ozanam specifically because a focused and extended effort is what it takes. “If there’s abundance, we need to try to put that to good use. One little thing makes such a world of difference.”

Two of Wilson’s residents, Philip and Vera Deering, are the heart of the latest donation project. Eighty-five-year-old Phil began by providing $200 to $300 worth of food items like meat to the center. Then, Wilson and the Deerings decided to hold a pizza party for the shelter’s clients. That couldn’t happen because of COVID-19, so instead, the community passed pizzas, soda, and salad through the fence.

Ozanam Center has remained open at limited capacity to assist the city with its pandemic response, serving three meals a day. “Every single person that was there was so excited to be able to come up and hold this box of pizza. For them, it was big. Things that seem little to us can make such a huge impact on others,” Wilson said.

She recalled a visit to drop off items in which she met an asylum-seeking woman from Honduras. “She was saying that God is good and always provides a place. Come to find out, she had to go to the hospital that night because her feet had lacerations from walking without shoes. But, she never complained,” said Wilson, in awe of the woman’s gratitude.

The shelter is in need of donations and accepts food items but can make monetary gifts go further by purchasing directly from Food Bank of the Rio Grande Valley. Donations both small and large can make a huge difference. The Deerings recently decided to start giving $1,000 a month from Phil’s military retirement pay to assist those who need it.

The couple has been giving in different capacities for years, like working with churches to “adopt” a family each Christmas or giving to pantries. Asked why he’s chosen to donate to Ozanam each month, Phil explained that his health is failing; he has congestive heart failure, kidney failure, and lung failure.

“God tells us to feed our poor. We felt an obligation to do that. And so we did. Up until now, this has been very private. And I had to bring it out,” he said. Deering described two prior heart attacks. His military retirement pay won’t be available to Vera when he passes. “The money won’t be there and I need help to carry this on. She can’t. And so that’s why I’m coming out of the dark,” he said.