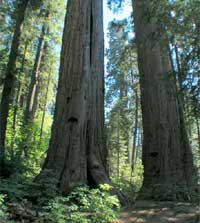 Trees knocked down by a windstorm Dec. 1 in the central Sierra Nevada in California will block forest roads and disrupt vacation plans for months to come, according to state and federal forest managers.

At Calaveras Big Trees State Park near Arnold, officials are still assessing how long it will take to reopen the park and how much of the popular North Grove Campground will be back in service by next summer, said Park Superintendent Gary Olson, the Stockton Record-Net reported.

Olson said that 40 to 60 trees fell in the North Grove Campground alone. No one was hurt because it happened when the campground was empty.

So far, Olson said, it appears that none of the park’s landmark giant sequoias fell.

Still, some of the large pines, firs and cedars torn out by the roots have stumps and root balls so large that no state park-owned heavy equipment will be able to move them.

“We may need to get a contractor in here to blow it up,” Olson said.

The Eldorado National Forest, generally in Amador and El Dorado counties, issued a statement that many forest roads are impassable due to trees toppled by the high wind.

“We anticipate that some roads and trails will remain blocked into next year and maybe beyond,” said Kathy Hardy, supervisor of the Eldorado National Forest.

Stanislaus National Forest spokesman Jerry Snyder said officials there so far have only assessed the damage in popular areas close to highways such as Pinecrest.

“There are many trees down in our campgrounds and in our permitted campgrounds like the Lair of the Bear which is (University of California) Berkeley’s campground by permit,” Snyder said.

Wind gusts exceeded 130 mph in some high-elevation areas of the Sierra Nevada. Sustained winds were registered near 100 mph.

Snyder said that many back roads in the forest will close for the season Thursday. That means no one will even assess the damage for months.

“We really are going to have to take a look at it next spring,” Snyder said.

Mountain parks and forests have always had to contend with downed trees. Many fall – or are snapped off above the ground – due to snow. Spring removal of trees across roads is routine.

What’s unusual about the recent wind storms is that many more trees fell over, often by being torn out at the roots. Forest officials say they don’t have funds budgeted for the cleanup.

At Calaveras Big Trees State Park, the cleanup effort is complicated by the fact that the park’s largest piece of heavy equipment – a 20-year-old, Fiat-made tractor with a large front bucket – was smashed by a falling tree.

Olson said the tractor was parked in the North Grove Campground, where it was being used for maintenance work. A falling tree made a direct hit on the tractor’s engine.

Debbie Henry-Caldwell narrowly escaped suffering the same fate as the tractor. Her bedroom in a 1940s-era house she shares with a Big Trees Park employee had its roof and ceiling destroyed by a falling tree.

Henry-Caldwell said she was in the bedroom just seconds before the tree fell the morning of Dec. 1. The phone rang. She left the bedroom to answer the call, hung up and paused to check the fireplace.

That same morning, park employees arriving about 7 a.m. found that another tree had crushed the entry kiosk where park staff normally collect admission fees and hand out trail maps.

Olson said that staff from other state parks, California Department of Forestry and Fire Protection inmate crews and even some volunteer trail crews had reported to help with the cleanup.

“We were extremely lucky,” Olson said. “If this had happened in the summer, it would have been a whole different story.”