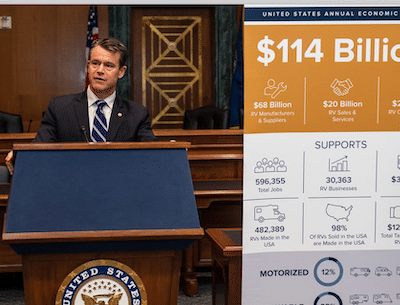 Indiana Sen. Todd Young
Buoyed by 38 first-time participants, the advocacy portion of RVs Move America Week saw more than 150 members of the RV industry “storm Capitol Hill” for 167 meetings with members of Congress and their staffs, eight meetings with five federal government agencies and one meeting with White House policymakers.

Formerly known as Committee Week & Advocacy Day, RVs Move America Week took place June 2-5 in Washington, D.C. The first day-and-a-half featured a series of RV Industry Association (RVIA) committee meetings designed to set the agenda for the Reston, Va.-based trade association, while the remainder of the event was set aside for attendees to advocate for industry-friendly policies and legislation with the movers and shakers in the nation’s capitol.

Jay Landers, RVIA’s vice president of government affairs, told RVBUSINESS.com, WOODALLSCM.com’s sister publication, that the re-branding of Committee Week to RVs Move America Week was in large part due to the “firm suggestion of the RVIA Government Affairs team, as we wanted to put more emphasis on the advocacy part of the week.”

“The expansion of the advocacy portion allowed the team to schedule more meetings on Tuesday afternoon — not only additional with Congressional offices, but also with staff directors for critical House and Senate committees like Senate finance, natural resources and House Ways & Means,” Landers noted, adding that the additional meetings took place with Administration officials, including Vice President Mike Pence’s domestic policy advisor as well as several U.S. Department secretaries and assistant secretaries.

“All in all, it was a very exciting and rewarding day, and we have a lot of follow up already being scheduled,” he said.

Monika Geraci, RVIA senior manager for strategic policy and communications, said the advocacy efforts during RVs Move America Week are important because they “lay the foundation for the work the Federal Affairs team does for the rest of the year.”

She added, “Hearing from constituents — the job creators — in their state or district brings a whole other level of influence to the policies and issues that are important to the industry. The Federal Affairs team is then able to follow up on those meetings and work with offices to pass critical legislation throughout the year.”

• 120 people participated in advocacy meetings — more than 150 members from the RV industry when you include RVIA staff who provided critical support for the meetings. This figure is about the same as last year’s event, and includes 38 first-time advocates, 16 dealers including three RV Dealers Association (RVDA) staffers, and 13 campground owners including three National Association of RV Parks & Campgrounds (ARVC) staffers.

• There were 176 advocacy meetings, including 167 Capitol Hill meetings, eight meetings with five different federal agencies, and one meeting with the White House.