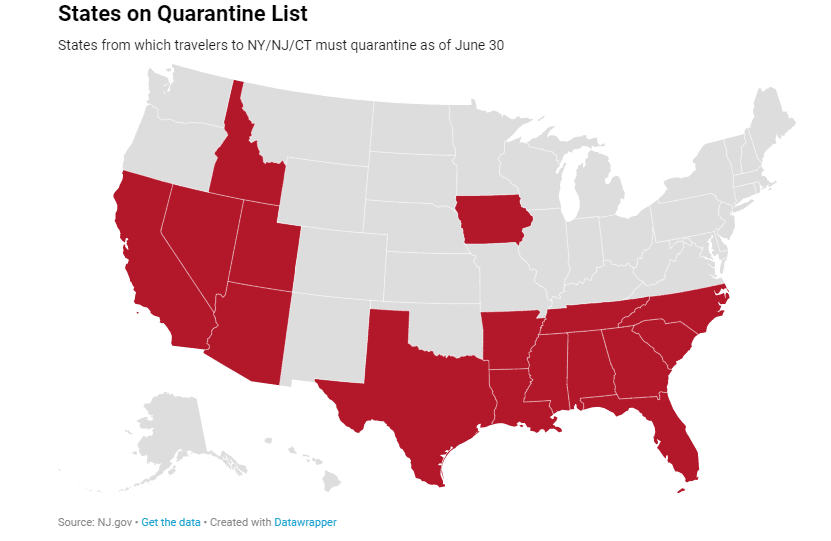 New York, New Jersey and Connecticut doubled the number of quarantine-restricted states to 16 Tuesday (June 30) as the rate of new U.S. COVID infections surged to a level the CDC warned may be beyond the nation’s ability to control.

It initially listed eight states when the tri-state first announced the order last week, a joint effort by governors Andrew Cuomo, Phil Murphy and Ned Lamont to protect the progress they’ve made in fighting coronavirus as more than half of U.S. states wage war anew. It asks travelers to self-isolate for 14 days if coming to the region from states where the seven-day rolling average of positive tests or positive cases exceeds a certain threshold. Violators may face heavy fines.

“Our numbers have come way down, probably as much as any American state, but we paid a huge price,” Murphy said on “TODAY” Tuesday. “We’ve gone through hell. The last thing we want to do is go through hell again.”

Cuomo, who leads a state that was losing 800 people a day at the height of the crisis in April, agrees. He blames the surges on the White House, which he says pushed rapid state reopenings over meticulous, data-driven restarts amid President Trump’s overwhelming drive to reboot the starved national economy.

“Time to wake up, America,” Cuomo said. “If that spread comes to New York, we could have to do this all over again. Doing this once in life is enough. We don’t need to climb another mountain.”

New York has been the nation’s most-impacted COVID state by far, with nearly 400,000 confirmed cases and almost 25,000 confirmed virus fatalities, though officials acknowledge both tolls are likely much higher. New Jersey added nearly 2,000 more deaths to its toll, now above 15,000, last week when it added probable fatalities to the overall count as New York City has done.

While both states have maintained low infection rates amid their reopenings, the spikes elsewhere are contributing to a rapidly accelerating national toll. The number of confirmed new coronavirus cases per day in the U.S. has hit an all-time high; hospitalizations have also increased in a dozen states, the head of the CDC said. The surge has been so dramatic that the European Union left America off the list of “safe” countries it released Tuesday regarding international travel.