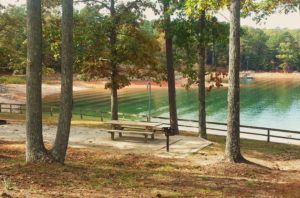 Two popular campgrounds on Georgia’s Lake Lanier – Sawnee and Bolding Mill – will not be open to cold-weather campers the winter of 2018-19, the U.S. Army Corps of Engineers has announced.

“The campgrounds will close entirely on Nov. 30 and reopen March 1,” the Corps, which operates Lake Lanier, said on its Facebook page, according to AJC.com.

“This is due to multiple factors, including low turnout, high maintenance and a need to give our dump stations time to settle from the heavy use these campgrounds receive,” the Corps said. “While we appreciate the campers who came out to winter camp at Lake Lanier, we can no longer support a winter campground operation at this time.”

The Corps said the two campgrounds have had an average occupancy the last three winters of only 33% from December through February, compared with 55% in November and March.