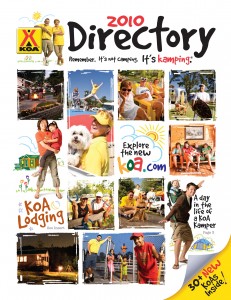 Campers throughout North America can now pick up their free 2010 KOA Directory at any of the 475 KOA locations in the U.S. and Canada.

“This is one of the largest and best KOA directories we’ve ever produced,” said Mike Gast, vice president of communications for Kampgrounds of America Inc. and coordinator of the KOA Directory, stated in a news release. “Our camping guests have made the KOA Directory the No. 1 marketing tool for our system. When our new and vastly improved KOA.com website is launched in May, we’ll have two incredibly powerful avenues to interact with our campers.”

The growth of the KOA Directory reflects the increase in size of the KOA system to 475 parks in 2010 – the most since the year 2000.

“We’ve seen a huge amount of interest on the part of independent campground owners in converting their parks to the KOA system in the past two years,” said Gast. “This year’s KOA Directory will have 30 new KOAs listed throughout North America. We’re growing, and we’ve got a lot of beautiful new locations to show to our campers.”

While the KOA Directory is free to campers at every KOA location, it is also available by ordering online at www.koa.com/orderadirectory.

The 2010 KOA Directory includes detailed listings of each campground, including the park’s special features, activities and amenities as well as locator maps and specific directions. For the first time, the 2010 Directory also includes a detachable brochure detailing KOA’s lodging opportunities.

“We added more than 250 deluxe lodges with full baths and kitchens to our KOA system in 2009, and we’ll add another 400 in 2010,” Gast said. “We’ve also got more than 4,000 of our simple, affordable Kamping Kabins available, so we truly have KOA camping any way you want it.”

For more information on Kampgrounds of America and what’s new for 2010, go to www.KOA.com.