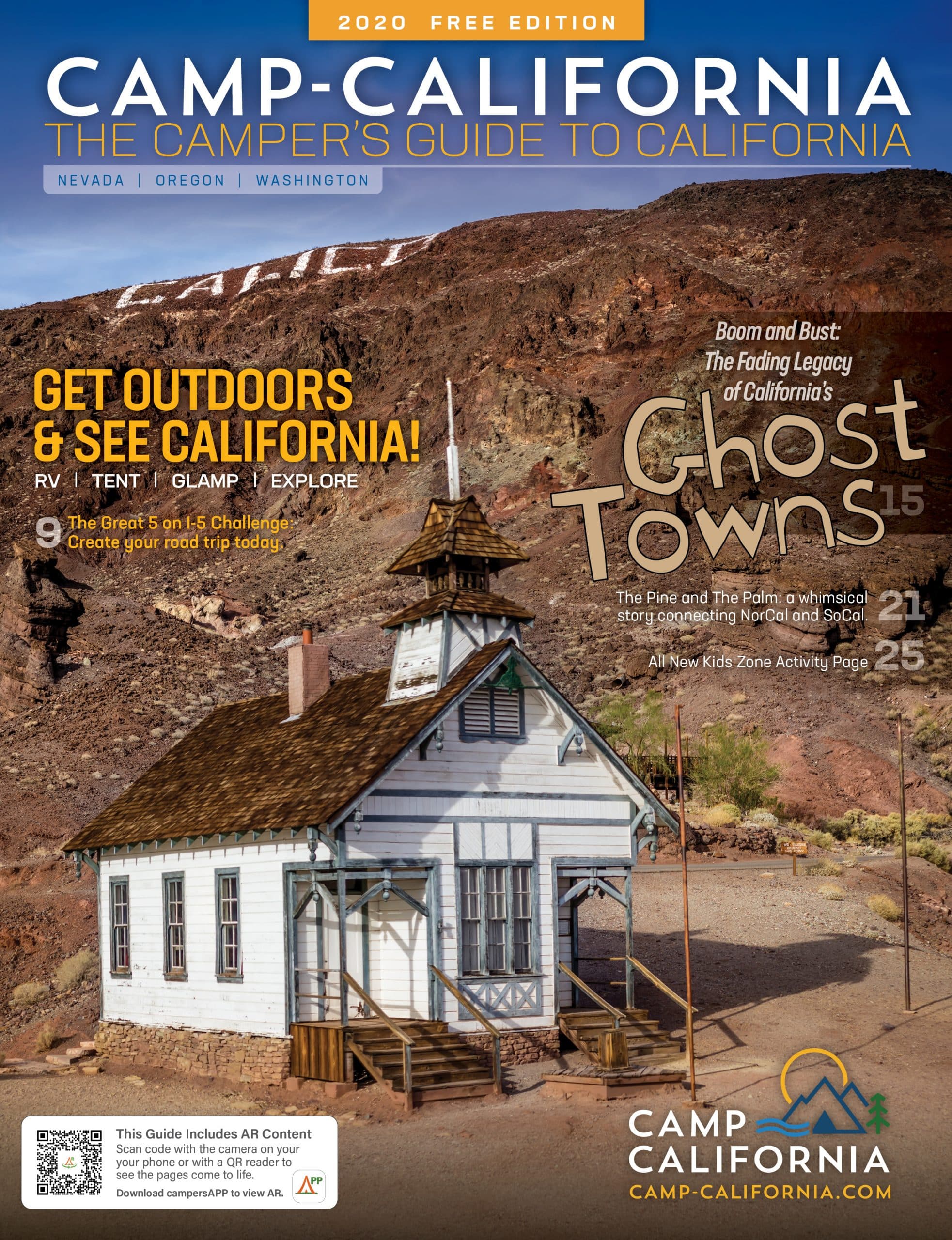 California’s historic ghost towns are the special focus of the 2020 edition of Camp-California’s The Camper’s Guide to California, which is now available in digital and printed formats, according to officials from the CampCalNOW RV Park and Campground Alliance (CampCalNOW).

“This has to be one of our best guides yet!” exclaimed Dyana Kelley, executive director and CEO of CampCalNOW.

CampCalNOW produces camping guides with a different theme each year. Last year’s focus was 13 caving destinations across California and Nevada. Next year’s focus is in the works, and with so much to explore in California, that is a tough decision, explained Kelley.

“We are putting a lot of rich content into these guides so that they become collector’s editions that people want to keep and use for their vacation planning,” she said. “This year’s guide is much more than a campground directory because it blends travel planning information with interesting articles about the history of nearly a dozen California ghost towns. It makes you want to take a camping trip and see these fascinating landmarks for yourself. To encourage travelers to move up and down the state, this year we created ‘The Great 5 on I-5 Challenge!’ If you visit 5 of the destinations on the challenge map, you can win a California I-5 challenge cutting board.”

While the 68-page printed campground directory does not provide all of the travel planning content that is available on Camp-California.com, it does provide a significant amount of trip planning articles and information.

This year’s guide includes information on 11 different ghost towns across California, including:

— Alcatraz Island: Alcatraz was originally meant for a lighthouse. It has since functioned as a military fort, a military prison and, ultimately, a federal prison for the “worst of the worst” inmates from all over the country. Alcatraz sees over 1 million visitors each year who enjoy the chilling stories and rich history of the island.

— Bodie State Historic Park near Bridgeport: Widely considered the best-preserved ghost town in the western U.S., Bodie was built as a gold mining town at the 8,400-foot level in the windswept Bodie Hills east of the Sierra. During the 1880s, Bodie had a bustling population of 10,000 people, but was notorious for its robbers, gunfighters and thriving red light district. At one point, there were as many as 65 saloons. Eventually, the losses outweighed the gains and Bodie became a ghost town in 1915.

— Falk Historic Logging Ghost Town near Eureka: The town of Falk was built around the Falk lumber mill in 1884. The original homes of the men and women who made a living logging the redwood trees are now completely buried. The only visible structures are a reconstructed barn at the end of a spooky trail. A two-mile self-guided tour takes about an hour to walk.

— Hearst Castle: Although Hearst Castle is not nearly as rustic as some of the buildings that comprise other ghost towns in California, it was still abruptly abandoned and would have been forgotten if not for its impressive architecture, artwork and history inside its historic walls. William Randolph Hearst began building the castle after he inherited $11 million and a 40,000-acre Central Coast estate after his mother’s passing. But when the Great Depression hit along with millions of dollars in debt, Hearst was forced to cease all construction and sell most of his art collection. The Hearst Corporation donated Hearst Castle, the gardens, and much of the remaining art to the state of California for visitors to enjoy.

— Julian: While most gold rush activity took place in northern California, a small amount of gold was found in the mountains of San Diego County in the late 1800s. When the search for gold came to an end, a few pioneers stayed and began farming the land and discovered that Julian was a perfect place to grow applies. Now widely known for its Julian Apple Days and Julian apple pies, visitors can enjoy a wide variety of year-round activities, including historical museums, horse-drawn carriage rides, wine tasting, apple picking, gold mine tours and gold panning.

— Locke Historic District near Lodi: Locke built in 1915 by Chinese immigrants from Heungshan [Xiangshan] County (modern day Zhongshan), in Guangdong Province, China, who faced discrimination in bigger cities. The historic district is located in the Sacramento-San Joaquin delta, a large agricultural area in Sacramento County, California. According to the National Park Service, the Locke Historic District is the largest, most complete example of a rural, agricultural Chinese American community in the United States. Locke was designated a National Historic Landmark in 1990 so that visitors can appreciate the architecture, history, and hard work that the original Chinese put into this riverside town.

— Mentryville (near Newhall): Mentryville was an 1880s oil boom town built around its oil well, Pico No. 4. Named for Charles Alexander Mentry, the oil well’s tenacious driller — and later superintendent of the company that would become Chevron — Mentryville was home to over 100 families until the early 1930s. Pico No. 4 went on to become the longest continually operating oil well in the world, closing in 1990. Historic buildings still stand, including Charles Mentry’s 13-room mansion, a one-room schoolhouse, and a period barn. Mentryville and Pico No. 4 are registered as California State Historical Landmarks.

— North Bloomfield (in the Sierra Nevada east of Nevada City): Originally named Humbug due its failed gold mining ventures, the population of North Bloomfield eventually reached 2,000 once hydraulic mining came into play. When hydraulic mining was banned, all gold mining efforts in North Bloomfield ended, causing all miners and their families to abandon their town. Although not totally abandoned, today’s small population of less than 10 is dedicated to preserving and sharing the history of one of California’s lesser known failed ghost towns.

— Old Sacramento: Old Sacramento Waterfront is a unique 28-acre National Historic Landmark District and State Historic Park that celebrates California’s beginning with the Gold Rush of 1849. The district is located along the beautiful Sacramento River. Bustling with activity, it is alive with shopping, dining, entertainment, historical attractions and world-renowned museums set within the time of the California Gold Rush and the Transcontinental Railroad. Old Sacramento Waterfront features dozens of recreated or restored buildings from the Gold Rush era. Wooden sidewalks, horse-drawn carriages and living history characters provide a glimpse into 19th-century life.

— Pioneertown (near Yucca Valley and Joshua Tree National Park): Pioneertown was founded in 1946 by a group of Hollywood investors, including actors Roy Rogers and Gene Autry, who dreamed of creating an Old West set 125 miles east of Los Angeles that would actually be a town worth visiting, with 1880s-style false-front facades but interiors that had things for visitors to see and do. So, inside what appeared to be frontier stables, saloons, and jails were actually ice cream parlors, bowling alleys, and motels. More than 50 films and television shows have been filmed at Pioneertown, though tourists get to enjoy it, too.

— Shasta State Historic Park near Redding: This park, six miles west of edding, preserves a row of aging, half-ruined brick buildings that once formed part of the “Queen City” of Northern California’s mining district. The park, often called “Old Shasta” by the locals, includes ruins along with some nearby roads, cottages and cemeteries, all of which serve as reminders of the bustling activity that once took place in this former mining town.

The printed copies of the 2020 Camp-California’s The Camper’s Guide to California, are available free of charge at member campgrounds, California Welcome Centers and Camping World Inc. locations. A copy can be ordered for $5 to cover the postage through Camp-California.com.

A digital version of the directory is available on Camp-California.com and includes links to more extensive campground and special event listing information, as well as advertiser websites. Camp-California.com and the digital version of the printed campground directory have also been redesigned to be compatible with mobile-, tablet- and desktop-friendly formats.

Though digital downloads of the directory increase each year, the association continues to find strong demand for a printed directory.

“The phone requests begin in December as our travelers are anxious to get their hands on the next edition.” said Kelley

The Camp-California’s The Camper’s Guide to California includes amenity grids for campgrounds in each region of the state that highlight 17 different types of amenities, such as swimming pools, laundry facilities, rental accommodations and Wi-Fi service. Brief descriptive write-ups, locator maps, websites, telephone and contact information are also provided for each park.

The directory is also supported by a growing base of advertisers, including campgrounds and RV aftermarket suppliers.

“Our advertiser base is growing more and more,” Kelley said, adding, “Businesses that market to RVers are finding Camp-California’s The Camper’s Guide to California to be a successful medium.”