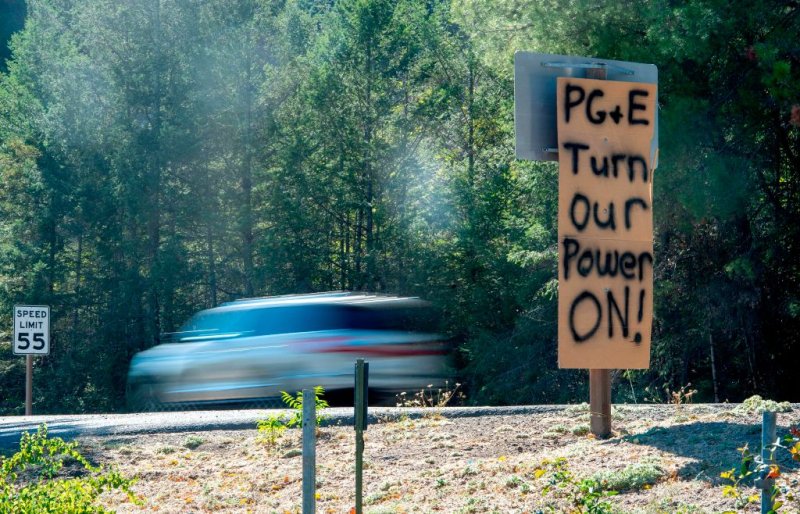 A sign calling for utility company PG&E to turn the power back on is seen on the side of the road during a statewide blackout in Calistoga, Calif., on Oct. 10.

Thousands of residents in northern California are expected lose power on today (Nov. 20) as a precaution against wildfires, according to TIME.

Utility company Pacific Gas and Electric (PG&E) announced Monday that about 303,000 customers in 25 counties are expected to be impacted, including in highly populated areas such as Oakland and Santa Cruz.

The precautionary power shut offs are due to high wind gusts and dry conditions that increase the risk for damage or sparks to its electrical system that could ignite a fire, according to the utility company’s Monday announcement. PG&E has faced frequent criticism by residents and lawmakers for shutting off power to millions of people in an attempt to prevent wildfires that could be sparked by its electrical systems, which critics say have not been properly maintained.

The utility company filed for bankruptcy in January after its power lines caused the 2018 Camp wildfire that killed 85 people. This October, PG&E announced its power lines might have also been responsible for a wildfire in Northern California’s wine country. Thousands of residents in California faced similar power shut offs throughout October while a string of wildfires burned throughout the state.

Monday’s power shut off announcement came the same day PG&E officials attended an all-day hearing in Sacramento, where lawmakers and residents accused the company of failing to maintain its system over time. William Johnson, PG&E’s CEO, told lawmakers that the wildfire threat in the company’s service area has increased from 15% in 2012, to more than 50% presently, according to the Los Angeles Times.