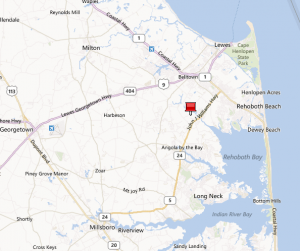 Plans to develop a 162-acre campground for RVs, tents and cabins have been submitted to Sussex County officials in Delaware, the Cape Gazette reported.

Developer Jack Lingo Asset Management has filed a conditional-use application with Sussex County for an RV campground. It’s the third such project presented for consideration over the past year.

Jack Lingo Asset Management has two applications pending for Love Creek RV Resort and Campground off Ward and Cedar Grove roads between Lewes and Rehoboth Beach. Lingo is asking for a conditional use and a zoning change from GR, general-residential district, to AR-1, agricultural residential, for 74 acres of the parcel. If approved, the entire parcel would be zoned AR-1. Campgrounds are prohibited in GR zones.

Although density in AR-1 zoned areas is two units to an acre, density is not a factor when constructing a campground under a conditional use, said Shane Abbott, assistant director of county planning and zoning. Campgrounds are only permitted in AR-1 zones with passage of a conditional-use application. Certain basic regulations must be met under county code including buffer requirements and each RV lot must be at least 2,000 square feet, Abbott said.

During a review of the proposed project, state environmental planners said the parcel is not suited for intense development, calling the parcel along Love Creek a key wildlife area with important wetlands. “We urge the the applicant to consider permanent preservation opportunities for forest and wetlands in lieu of the current site plan,” said Department of Natural Resources and Environmental Control’s Kevin Coyle.

An engineer representing the developer disputes DNREC’s claims. “There is no record of federally listed threatened or endangered species or their critical habitats existing on this site,” Ring Lardner said. “There are not a myriad of wetlands within the site. It’s mostly well-drained uplands with few development limitations. Except for wetlands bordering Love Creek, regulated wetlands internally are two well-defined stream courses.”

Lardner is an engineer with Davis, Bowen & Friedel.

More than 600 campsites on plan

The project is expected be built in several stages. Hammond said more emphasis would be placed on seasonal RV rentals and not as much on transient rentals.

The first public hearing on the applications will take place before the county’s planning and zoning commission at 6 p.m. Jan. 24, in the county administration building on The Circle in downtown Georgetown. A county council hearing will be scheduled following this hearing.

The developers privately invited some area residents to a Dec. 27 meeting in Lewes. “We thought it would be better to introduce the project this way prior to people getting a public notice and getting surprised by it,” said Nick Hammond with Jack Lingo Asset Management.

Hammond said developers looked at residential options for the parcel before thinking outside of the box. “After some financial modeling, this project made sense,” he said. “It’s a great site for this type of use with Love Creek and the proximity to the beaches and shopping.”

Developer responds to PLUS comments

The project was reviewed under the State Office of Planning Coordination’s Preliminary Land Use Service (PLUS) process last summer and comments on the review were offered by the developer in October 2012.

Many state agency comments centered around the environmental significance of the parcel, which has been owned by J.G. Townsend Jr. & Co. since the 1930s. “They are well aware of environmental issues on the site,” Lardner said.

DNREC’s Coyle said half of the parcel contains forest in the Love Creek Natural Area. In addition, he said, rare species have been identified on the site, which he said is considered a State Natural Heritage Site.

The developer also disputes those statements. Almost all of the site to be developed is wooded; Lardner said all sites would be developed cutting down as few trees as possible. In addition, he said, the developer plans to provide at least 50-foot buffers around all wetland areas and around the perimeter of the campground.

Terrence Burns of the State Historic Preservation Office said there are at least two known archeological sites contained within the parcel. In addition, he said, unmarked family cemeteries are common in rural farm areas. He said the Division of Historical and Cultural Affairs recommends the developer hire a consultant to investigate the property for the presence of an unmarked cemetery.

Lardner said the developer would comply with requirements of Delaware law pertaining to skeletal remains should it pertain to the site.

Delaware Department of Transportation’s Bill Brockenbrough said that the plan showed only access from Ward Road on the southwestern edge of the parcel. Since that initial proposal, the developer has added an entrance along Cedar Grove Road, a road serving as the northwestern border of the parcel. The Ward Road entrance would be restricted to 200 camp sites.

During the past year, county officials have debated two other campground projects. Officials approved a 260-lot RV campground on a vacant parcel in the Rehoboth Shores manufactured home park near Long Neck. The other application, an RV campground as part of a water park project in Ocean View, is pending before the county council. According to the council’s Tuesday, Jan. 8 meeting agenda, water park developers will ask council to withdraw the applications needed for the project.