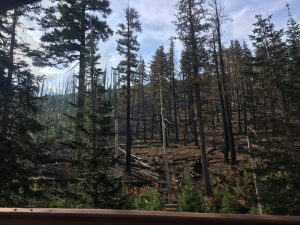 Charred forestland along the Santiam Highway in Blue River, Ore.

All of that activity manifested into smoke-filled air and limited visibility for many Oregonians over the course of several weeks.

According to the Lake Oswego Review, the “sheer volume of fires all at the same time and continuous days of growth up through Washington and Idaho” created the oppressive conditions, said Doug Grafe, fire protection division chief at the Oregon Department of Forestry (ODF).

More than 8,000 personnel from different agencies have been deployed to fight 1,903 separate wildland fires across the state. That’s more than one-third of the personnel deployed to combat wildfires nationwide, Grafe said.

The most dangerous fires started in late July and early August. The region had been dry since mid-June, with no significant rainfall until last week. Tens of thousands of lightning strikes contributed to the severity of the fire season.

Smoke had already captured the attention of most of the state when the human-caused Eagle Creek fire ignited Sept. 15 in the Columbia River Gorge, trapping 150 hikers and threatening the City of Portland’s water supply, the Bull Run Watershed. 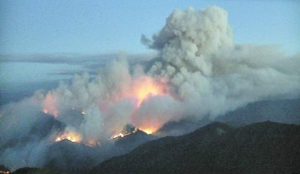 Fire crews kept the fire from that crucial water supply and from the Multnomah Falls Lodge, where flames came within 40 feet of the historic structure.

“A lot of what this fire was doing was spotting out ahead of itself within communities, and they were just having to go after it and catch it,” said Oregon Fire Marshal Jim Walker. “They did that hand-in-hand with all of the resources, partnering together.”

“I think we are in a good place with the rain and the conditions,” Grafe said.

Gov. Kate Brown deployed the Oregon National Guard on Aug. 2 to respond to several severe fires. National Guard helicopters assisted with the rescue of trapped hikers and poured 1.3 million gallons of water on burning land and structures. ODF has released the helicopters after 45 days of duty. 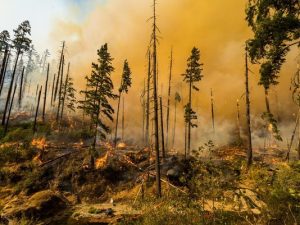 The Jones Fire burns in the Fall Creek area, east of Eugene.

The conditions on air personnel are as bad, if not worse, than combat, said Dave Stuckey, deputy director of the Oregon Military Department.

The state placed 950 National Guardsmen on state active duty, a high for any year since Hurricane Katrina in 2005, when 1,979 Oregon National Guard personnel were deployed, Stuckey said.

Fire crews have suffered no fatalities, but there have been about 34 injuries among National Guard personnel and 23 among ODF personnel.

Those four fires alone threatened 19,978 residences and destroyed 10, forced the evacuation of nearly 8,000 people and cost the state about $15.3 million to fight, according to Walker.

Oregon is one of the few states with a wildfire insurance policy, but that will cover only 42,000 acres, or about 6% of the affected areas in the state, Walker said.