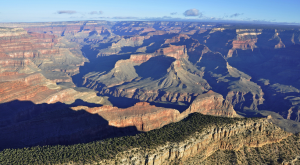 Arizona lawmakers want to take back the Grand Canyon and use one of the seven natural wonders of the world to generate more revenue for the state.

A referendum placed on the Nov. 6 ballot by the Legislature would amend the Arizona Constitution to declare sovereign control over air, water, minerals, wildlife and public land including national parks – a move to sidestep federal environmental laws and open up 25 million acres of public space to more livestock grazing, logging and mining, the Standard-Examiner, Ogden, Utah, reported.

Supporters say the proposition – which follows a Utah law signed in March by Gov. Gary Herbert demanding some U.S. land be handed over by 2014 – sends an important message in a battle against an overreaching federal government, which controls more than half of the land in the West. Opponents say the plan is unenforceable, unconstitutional, environmentally irresponsible and typical of a state known for high-profile confrontations with national authorities on illegal immigration.

“If you want to start a war, this is the way,” Bender, dean emeritus of the Sandra Day O’Connor College of Law, said by telephone. “When the state passes its own immigration law, people say, ’Well, that is crazy Arizona.’ But if people go to the Grand Canyon and find a uranium mine there, they are going to be very upset.”

The efforts in Utah and Arizona are reminiscent of the so-called Sagebrush Rebellion over restrictions on the use of public land and wilderness designations in the 1970s. They come amid a spate of states’ rights measures challenging federal firearm restrictions, the national health care overhaul, marijuana prohibition and other laws.

Devastating wildfires, fiscal challenges facing state governments and environmental protection efforts under President Barack Obama have renewed the fervor in the mountain states. Among the environmental protections: a 20-year-ban on new uranium and other hard-rock mining on 1 million acres near the Grand Canyon National Park signed by Interior Secretary Ken Salazar on Jan. 9.

Aimed at protecting the $3.5 billion a year spent by tourists to the second-most visited national park, the ban is being challenged by the Nuclear Energy Institute and the National Mining Association. Denison Mines Corp., Concentric Energy Corp. and Vane Minerals own uranium mines in Arizona, according to data compiled by Bloomberg.

Lawmakers in New Mexico, Nevada and other states are working on bills to seek control of federal land within their borders, too, said Ken Ivory, a Utah state representative who sponsored his state’s legislation and serves as president of the American Lands Council, which advocates for local control of land. Recent wildfires, which supporters blame on environmental restrictions and federal mismanagement of national forests, is helping his case as he meets with officials across the region, the Republican said.

“The people connected to the land will be more responsive and responsible than some distant, broke federal landlord,” he said.

Fed Holdings in the West are Vast

The federal government controls more than 50% of land in Western states, compared with less than 3% in states east of Colorado – and that puts the region at a disadvantage, Ivory said.

Utah’s Republican governor said royalties and severance taxes from mining, grazing and other commercial use of public lands were being blocked by “arbitrary and overly restrictive” federal policies that reduce his state’s ability to fund education and meet future needs. The U.S. controls nearly two- thirds of the land in Utah. The new state law excludes national parks and most wilderness areas and monuments designated by Congress.

“This is not just a Utah problem, it is a western problem,” Herbert said, according to remarks posted on the governor’s blog in March. He said the state measure provides leverage for dialog with the federal government.

Arizona lawmakers, seeking to follow Utah’s lead, were blocked earlier this year by Gov. Jan Brewer. Brewer, a Republican who came to national prominence for signing the state’s 2010 immigration law that led to boycotts and a federal court battle, vetoed a measure demanding the titles to federal lands and outlining procedures for selling it off to private owners.

“As a staunch advocate for state sovereignty, we still must be mindful and respectful of our federal system,” Brewer said in her veto letter. She said the measure, which “appears to be in conflict” with the U.S. Constitution, would create uncertainty about existing leases on federal land and be financially untenable, costing the state more than $23 million a year to manage the lands. She hasn’t taken a position on the ballot measure, spokesman Matthew Benson said.

State Rep. Chester Crandell, a Republican who sponsored the ballot initiative, said he thinks Arizona is entitled to the entrance fees at the Grand Canyon and other national parks, as well as royalties from commercial uses of public land, which should be expanded, he said.

The constitutional amendment requires further action by the Legislature and Congress to have an impact, Crandell said. If the referendum passes, Crandell said he’d introduce legislation to build roads through federally-protected wilderness areas at the U.S.-Mexico border to improve security.

“We are being encroached by the federal government all the time on what we can and can’t do in our state boundaries, the air we breathe and all that,” said Crandell, 66, a first-term lawmaker from Heber, in northeastern Arizona, now running for the State Senate. “I love the open spaces like everyone else does, but I think we can open it up to industry, use our forests and grazing lands for the state of Arizona without it going back to the black hole in D.C.”

Environmental groups such as the Sierra Club are leading opposition to the proposition. The state, which has struggled to keep its own parks open and loosened environmental regulations, can’t be trusted to manage millions more acres of land or environmental health, said Sandy Bahr, director of the club’s Grand Canyon chapter.

“I find it offensive that in order to make a buck today we have to trash the environment for many future generations and relinquish something that is a special part of this country, our public lands,” Bahr said.

Over the past four years, the Legislature has redirected more than $81 million of state park funds to close budget deficits, according to Cristie Statler, executive director of the Arizona State Parks Foundation. In 2010, 23 of the 31 state parks were set to close until local governments and nonprofits intervened, she said. The state has 20 national parks, six national forests and 90 wilderness areas, said Les Corey, executive director of the Arizona Wilderness Coalition.

“Arizona is endowed with some of our nation’s most spectacular landscapes and iconic public lands,” Corey said by telephone. “These lands are lands not only for Arizonans but these are lands that belong to all Americans.”