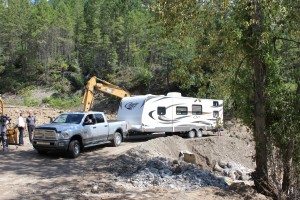 The first RV makes its way over a makeshift bridge at Fairmont Hot Springs RV Park, which was isolated from the main resort for a day following a mudslide in July.

Read this and other stories in the September issue of Woodall’s Campground Management now on its way to readers across North America.

The mudslide that inundated the grounds of the Fairmont Hot Springs Resort on July 15 still has Marke Dickson, the resort’s director of sales and marketing, shaking his head.

“It’s a miracle no one was hurt,” Dickson told Woodall’s Campground Management a week after the calamity struck the resort located in the Columbia River Valley in southeast British Columbia, about 80 miles north of the U.S. border.

How else to explain how a 9-foot-tall torrent of water, mud, boulders and torn down trees could cascade through the mountain valley on a Sunday afternoon with hundreds of people enjoying the picturesque setting and no one even suffering a scratch?

Dickson credits the quick thinking of the resort’s lifeguards who first saw the torrent rushing toward the resort, and therein lies the lesson that all RV parks and campgrounds should take away from this incident: All of Fairmont’s staff, including lifeguards, are trained to handle emergencies such as personal injury, storms, fires and power outages. It’s part of running a resort. No one, however, is trained for handling cascades of water that brought to mind Hollywood disaster flics.

How the lifeguards reacted made all the difference, we’re told, and here’s how it played out.

The day started out well, Dickson recalled. Steady rain the night before had subsided and some 500 campers and countless other lodge guests were enjoying the grounds. The resort features Canada’s largest natural hot springs and the mountain-fed Fairmont Creek that flows through the resort, dividing the lodge and hot springs on the north side from the 200-site RV park on the south.

At 4:41 p.m. Mountain Time, several lifeguards began to notice the usually clear creek water turn muddy in front of the lodge. They looked up and saw the wall of water blasting forward toward them. Within 90 seconds, the torrent would arrive.

“It’s not something we are prepared for because it’s never happened before,” Dickson said.

A handful of people frolicking in the creek were alerted and quickly helped up the creek bank.

Witnesses later said the sound of the approaching torrent was like a freight train rolling by your bedroom window. There was lots of noise and some confusion.

The lifeguards began yelling for everyone within earshot to seek higher ground.

Hundreds dashed for safety, although some wanted to stay behind and record the unique event on film.

“The guys on the scene reacted well and quickly, understanding what was happening,” Dickson recounted. “There is a natural excitement when things like this roll through that people want to stand by the edge and take photos and videos. Our team’s job was to keep people away from the brink. These guys were on to it straight away. If they had been 10 or 15 seconds slower, we would have a different story.”

The torrent flowed through the park, carrying away the causeway and pedestrian bridge, the only way out of the RV park, and trapping hundreds of people in the park.

Within a few minutes, the torrent subsided, leaving behind debris and mud as deep as 10 feet in places over the grounds.

“The initial challenge was to make sure people were safe and staying away from debris flow,” Dickson said.

Remarkably, staff and guests established a makeshift communications network of cell phones and radios and began to check on the whereabouts of family members who were split up and on different sides of the creek when the wave passed through.

“Emergency services were on the scene quickly,” Dickson recalled. “RCMP (Royal Canadian Mounted Police) took charge of the immediate scene, securing a buffer zone around the canyon walls. We had some RV park staff members trapped on the RV side. They were able to marshal the response on that side.

“Within an hour we were confident everybody was accounted for, using guest lists, buddy teams and muster lists. We still are calling it an absolute miracle everybody made it through OK.”

People remained calm, even though some 500 campers in the RV park were suddenly stranded by the loss of the causeway and bridge.

Once the guests’ safety was confirmed, the task of inspecting infrastructure and finding a way to reconnect the two portions of the park was undertaken. Crews began to move earth to fashion a makeshift bridge.

The damage elsewhere was immense. The resort’s fresh water supply was wiped out; the hot springs were covered with mud, as was one of the resort’s three golf courses, Mountainside Golf Course.

Meanwhile, the stranded RVers “were remarkably resilient” in handling their isolation, Dickson said, even though the park’s fresh water supply was ruined. “They all had a warm place to stay and made the most of it. We felt a lot of pressure ourselves to re-establish the link as quickly as possible.”

And work they did, around the clock to build the temporary roadway across the creek with rock and fill dirt and, by the middle of Monday afternoon, the bridge was ready.

“The atmosphere when they were released that Monday afternoon was almost electric. The first ones out were from California. They honked their horns, there was clapping and cheering as they drove over the makeshift bridge. (See photo) It was a bright moment.

“People were really orderly as they left. We were surprised how many stayed and finished their vacations with us. Many had plenty of fresh water. We figure 50 percent of the guests chose to leave once the bridge was built, but the other half stayed on.”

Dickson said a conservative estimate places the damage to the resort at $4 million.

As soon as the fresh water supply was re-established, the RV park reopened. That occurred Aug. 3.

Again, Dickson said training staff to be ready for the unexpected was the key to keeping the ordeal from being much worse. “In all fairness, we have lots of plans that deal with crises, whatever they might be,” he told this writer. “You worry about severe electrical storms and fires. Debris flow was not top-of-the-mind for us. We adopted those plans to meet this need.”

So, you can prepare all you want but in times of extreme crisis, it also might take a miracle.