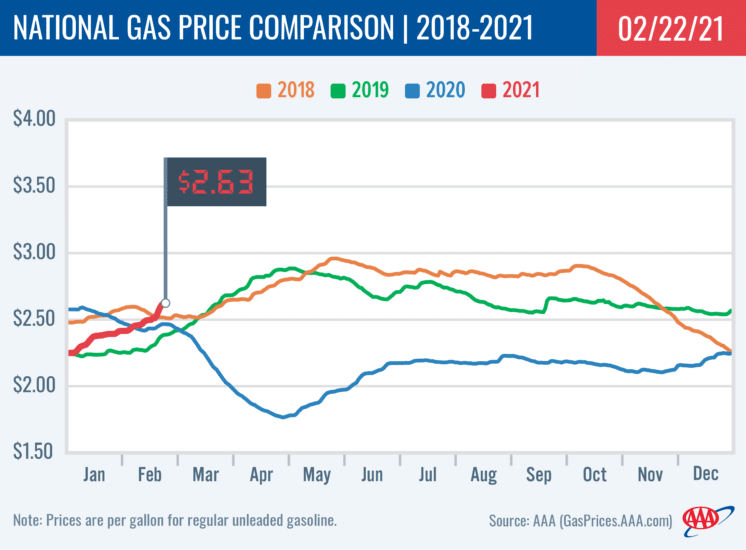 Motorists are filling-up to some of the most expensive gas prices seen in over a year, AAA reports. With the forced shutdown of Gulf Coast and some Mid-West refineries due to last week’s winter weather, gasoline stocks have tightened and gas prices have skyrocketed.

“When close to 40% of U.S. crude production is offline because refineries are closed, there is going to be pain at the pump until operations resume,” said Jeanette Casselano McGee, AAA spokesperson. “The good news is the nearly two dozen impacted refiners are expected to restart operations this week, if they haven’t already. That means regular gasoline deliveries will resume and impacted stations will be re-fueled.”

The Energy Information Administration (EIA) reports gasoline stocks sit at 257 million bbl. Just 2 million bbl short of year-ago, stock levels are relatively healthy. That will allow ample supply to get to impacted areas. EIA’s latest demand measurement of 8.4 million b/d is the highest reported since early November of last year. However, AAA expects that number to be lower in this Wednesday’s report as last week’s winter storm took motorists off the road.

Gas prices are likely to be volatile until crude production is back to normal levels. Motorists can expect these more expensive prices to stick around, but large spikes are likely to subside.

At the close of Friday’s formal trading session, WTI decreased by $1.28 to settle at $59.24. Crude prices took a step back last week amid market concern that crude demand may not rebound as expected, but prices did push higher earlier in the week due to supply and delivery impacts from the winter storm. Crude prices were also bolstered by EIA’s latest weekly report revealing that total domestic crude inventories dropped by 7.3 million bbl, bringing the supply level to 461.8 million bbl. For this week, crude prices will likely rise if EIA’s next weekly report shows another decrease in total stocks, but price gains could be limited again if demand concerns persist.