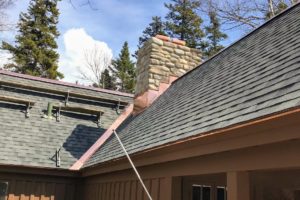 A new roof and restored chimney are part of a major renovation of the entry station at Seawall Campground in Acadia National Park.

There is a new water tank at Blackwoods Campground and a like-new entry station at Seawall Campground in Maine’s Acadia National Park, according to the Mount Desert Islander.

With a capacity of 47,000 gallons, the new water tank is larger than the one it replaced, which had been “failing slowly over the years, losing water and having lots of small-scale fixes,” said Christie Anastasia, the park’s public affairs specialist.

The new Blackwoods tank, which was completed about two weeks ago, provides water for the campground and for the restrooms at Sand Beach and the Fabbri picnic area. It is 15 feet taller than the old one.

She said there had been some concern that the taller tank would be visible from Cadillac Mountain, but that is not the case.

Blackwoods Campground opens for the season May 1.

Seawall Campground opens May 23. Renovation of its entry station is expected to be finished this week.

“There was a complete interior renovation, roof replacement and chimney restoration,” Anastasia said. “Rocks were falling out of the old chimney.”

The renovation also has brought the building into compliance with ADA standards for accessibility.