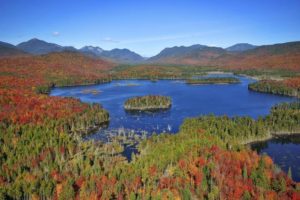 The Boreas Ponds tract in the Adirondacks is pictured.

Discussions about forest ranger staffing levels and overuse of New York’s Adirondacks are heating up, as stakeholders call on state officials to bolster the ranks of those who protect the natural resource, according to The Daily Gazette.

Forest rangers have steadily pushed for reinforcements, pointing to a rise in search and rescue operations. Their push has garnered widespread support from local governments.

Lots of people call it “a good problem to have,” but the increased popularity of the trails and attractions in the Adirondack High Peaks has also strained natural resources and complicated management efforts.

Adirondack Council Executive Director William Janeway said recently the Adirondacks’ largest advocacy group is “pivoting” away from its focus on how to classify new state land and is instead looking at how the state will handle efforts to manage increasingly popular park trails and campsites – and the overflowing parking lots that result.

As state and local officials gathered Thursday to cut a ribbon and tout the partial opening of the new Frontier Town state campground in North Hudson, Randy Preston, chair of the Essex County Board of Supervisors, raised an issue many in the Adirondacks are focused on.

“By the way, should I remind you the High Peaks area needs more [forest] rangers?” Preston said.

Essex County, along with around 40 other local governments, has passed a resolution calling for an increase in forest ranger staffing, as the rangers strive to increase their staffing levels to 175 field rangers and leadership officers – up about about 40 positions from current levels.

Bolstered by the support of local governments, the union that represents state forest rangers has pressed for hiring.

“The bottom line is we just need more people to handle it. There is no way around that simple fact,” said Art Perryman, a forest ranger in the Gore Mountain area and a union representative.