After Fires, Parts Of Calif. May Never Look The Same 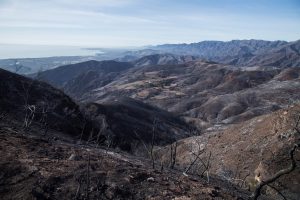 The hills above Carpinteria that were burned in the Thomas fire. (Claire Hannah Collins/Los Angeles Times/TNS)

As hotter and bigger fires blaze through the West and yet another year passes with a disastrous toll, America’s wildlands are having a harder time bouncing back. Some spots, from the singed valleys of wine country to the steep slopes of the Sierra, may never look the same, according to the Tampa Bay Times.

The fiercer fires are killing more of the vegetation needed to provide seeds for regrowth, and scientists are learning that even when new trees sprout, many are struggling with the warmer and more extreme weather wrought by climate change.

While wildfires have historically benefited the natural landscape, cycling soil nutrients and clearing space for new plants, for example, scientists say more burned areas are likely to end up devoid of trees and populated instead with weeds and grasses. This new vegetation is even likelier to burn, setting in place a vicious cycle of only more fire and less forest.

The latest research on forest regeneration, published last month in the journal Ecology Letters, found that as much as one third of the areas burned since 2000 saw no trees return, about double the treeless land that resulted after fires before 2000.

In 54% of the areas burned this century, the research suggests, too few trees grew back to ensure a full forest recovery.

The study looked at nearly 1,500 sites that burned between 1985 and 2015 across five mountain states.