AGS is widely known across the country for its work developing campground guides, the maps that RV and camping enthusiasts use to find their campsites.

AGS provides these guides to private park operators for free because the guides are paid for by local restaurants, tourist attractions and other businesses whose advertisements are prominently displayed on the guides.

But AGS also uses a portion of its advertising revenue to support several charities that are involved in various humanitarian efforts, both here and overseas, according to a news release. One group to receive AGS support is Rancho Mirage, Calif.-based IMAHelps, which organizes medical humanitarian missions to some of the most impoverished communities in Latin America and Asia.

During its latest medical mission to Jinotega, Nicaragua, in August of this year, IMAHelps volunteers delivered $13.4 million worth of surgeries and other medical and dental services to 13,733 indigent patients. 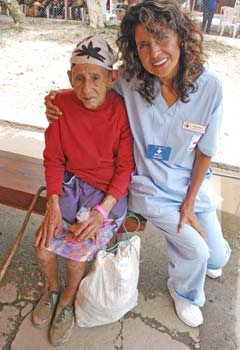 Ines Allen, founder of IMAHelps, with a patient.

IMAHelps volunteers raised $85,000 in cash and material donations for the Jinotega mission, which resulted in a return on investment of $158 in healthcare and dental services for every dollar donated to IMAHelps, according to Ines Allen, IMAHelps’ president and founder.

“It was an extremely productive mission,” Allen said, adding that the $1,150 check the group received from AGS in October will be used to help pay for IMAHelps’ upcoming medical mission to an impoverished community near Lima, Peru, which is scheduled for Aug. 8-18, 2013.

Schaeffer said he has been impressed with the magnitude of IMAHelps’ work, which has been documented by independent news organizations in Latin America as well as by IMAHelps volunteers.

“And with AGS’s charitable contributions,” Allen said, “IMAHelps will gain even more recognition, not only from the campground industry, but from advertisers who learn that some of the money they spend on guest guides will also be used to change people’s lives in a positive way.”

More information about IMAHelps is available on its website at www.imahelps.org.

AGS is making donations to IMAHelps and four other charities on a quarterly basis. For more information about AGS, visit its website at www.agspub.com.