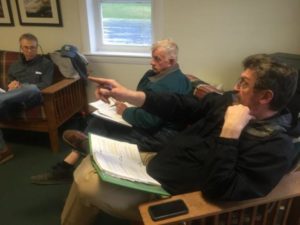 Deck’s comment April 25 came as fellow member Pam Brackett stated concerns about airplane noise and nearness to her business, Chewonki Campground, according to the Wiscasset Newspaper.

“You’ve got a campground next to an airport. That isn’t going to go away,” Deck said.

The discussion came as the panel continued drafting airport rules. The document, begun last year, may be ready for selectmen’s review this summer, said Deck, a past manager of the town-owned airport.

Wiscasset’s facility does not have to have the rules, but they are highly recommended and may become required, he said.

Brackett asked if “voluntary” could be pulled from the description of the airport’s noise abatement program that encourages pilots to minimize noise in their flight patterns and other procedures. Chairman Steve Williams said the airport can’t require it.

Williams, a pilot, said 99% of pilots make the effort. The wind aloft can impact a plane’s path, he said. He asked if the problem was with overhead aircraft or the noise.

Both, Brackett said. She said planes do not often fly low, but when they do, “it is quite frightening to not only us, but our guests.”

About the noise, Williams said the neighborhood has more road traffic than air traffic. So he struggles to understand why she doesn’t have an issue with cars zooming past, he said.

A car’s noise is different from a plane’s, Brackett said. She asked Airport Manager Rick Tetrev if she could contact him when a plane flies over the property. Tetrev said if those planes are based there, he could certainly talk to the pilots, but most of them know what they’re supposed to do.

Pilots who would do what she described are more likely ones he might never see again, he said.