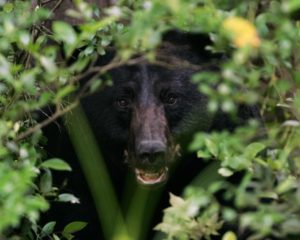 On Saturday, Miller said, a bicyclist camping at Lower Ohmer Lake was awakened by a bear stepping on her tent, according to Kenai Peninsula Online.

“She made noise, the bear ran off,” Miller said. “The neighbors in the adjacent campsite came out. Then they all went back to bed, and it seems like the bear returned later. The woman didn’t report anything to the refuge, though we’ve contacted her since then. She doesn’t report any injuries — she said she had a slight scrape on the shoulder.”

After getting a report from a neighboring camper the next morning, the refuge closed the Lower Ohmer and the nearby Upper Skilak and Engineer Lake Campgrounds to tent campers, moving those there to Hidden Lake Campground and waiving the fee for that site. The three campgrounds remain closed to tent camping, though open to day-use and hard-sided RVs.

“We’ll make a decision over the next few days here about when it should be safe to go back in there,” Miller said. “We’ve had people enjoying those campgrounds and haven’t had anything approaching that incident since then. Bears since then have walked through the campground, but shown no interest in any of the campsites.”