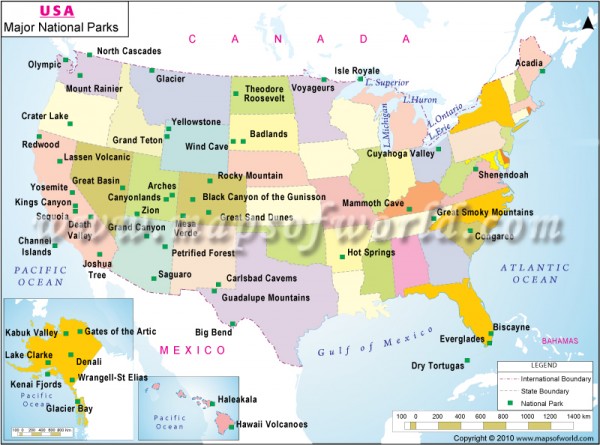 The majority of national parks are located in the West, making it a more attractive for new business development, according to a report published this week. Map courtesy of www.mapsoftheworld.com.

Access to high-quality outdoor opportunities in Western parks and other public lands is a key factor driving economic growth in Washington, according to a report released Thursday (Nov. 29), with the West in general outpacing the nation, the Public News Service reported.

Ben Alexander, associate director of the nonprofit group Headwaters Economics, says its new “West is Best” report finds Western states grew more jobs at nearly double the rate of the rest of the nation during the past four decades. He says Washington has outpaced the nation in population, employment and personal-income growth during the last decade.

“I know everyone in Washington state is probably not thinking they have the economy they want, but to put it in perspective, Washington state outperforms the rest of the United States across those basic indicators of economic growth.”

Alexander says more local Chambers of Commerce and economic-development associations are using national parks and public lands as tools to lure companies to relocate out West. According to the report, employment grew in the West by 152%, compared with 78% for the rest of the nation from 1970 through 2010.

Alexander says Washington is following the trend of other Western states in that most of the economic growth is in high-tech and service-sector jobs. He says the state has been able to attract more of these better-paying jobs in the past decade, in part because of its parks and public lands.

Alexander says when he talks to recruiters for high-tech and service-industry companies, they say quality of outdoor opportunities is a prime factor in attracting talent.

“People are interested in balancing career with lifestyle, and as a result the quality of life in a place; including the opportunity to participate in the outdoors and various forms of recreation – trails, parks – are tremendously important.”

The full report, “West is Best: How Public Lands in the West Create a Competitive Economic Advantange,” is available online at www.headwaterseconomics.org.