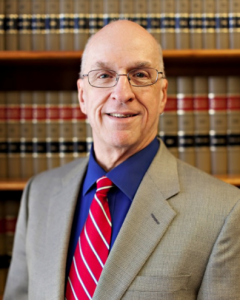 The Arizona Association of RV Parks & Campgrounds (Arizona ARVC) announced that it has given its highest award to Michael Parham, an attorney specializing in laws governing RV parks and manufactured home communities for the past 30 years.

“It is a great honor for me to receive this recognition,” said Parham, a partner in the Scottsdale firm of Williams, Zinman & Parham P.C., who has represented RV and manufactured home communities in more than 100 fair-housing-discrimination claims.

“I have never lost one involving an RV park, and very few for other types of communities,” he said, adding that he has authored various books and training materials for RV parks and manufactured housing communities in Arizona that deal with fair housing and landlord-tenant laws in addition to leading numerous conferences on these topics for community managers.

Parham opposed the initial RV Rental Space Act of 2000, which imposed a code of landlord-tenant laws on RV parks. He subsequently drafted legislation that cleaned up problems with the 2000 law.

“The initial version of the act applied if an RV was in a park for six months whether the landlord wanted the act to apply or not,” Parham said. “The revised version says it applies only if there is a single rental agreement for over six months and also specifically states that a landlord cannot be forced to agree to a six month or longer agreement.

“Other changes,” he continued, “included allowing late fees for late payment of rent, requiring payment of accrued rent before an RV can be removed from a park, allowing for attorney fees in court cases including evictions, allowing guest fees in addition to rent for guests staying with a tenant, and, in the case of an evicted tenant, forcing the RV to stay in the park while the tenant is removed.”

Parham was also involved in a national effort in the 1990s to scale back some of the requirements of the Fair Housing Act, specifically a requirement to provide “significant facilities and services” for seniors, which were creating excessive burdens for RV park communities.

“In Arizona, I was partly responsible for that effort and even participated in organizing a turnout of nearly 10,000 tenants to let government personnel know of the expense and problems (associated with Fair Housing Act requirements). Five such meetings were held by HUD officials around the country and they finally agreed to scale these requirements back and to not oppose a change in 1995 repealing the significant facilities and services requirement from the act,” Parham said.

Another topic of particular concern to Parham is the RVs or park models that are abandoned after an eviction, death or disability.

“Often tenant families will not intervene, meaning the landlord is left with an abandoned park model or other RV not being maintained on a space with no rent coming in,” Parham said.

“I created a procedure using landlord-tenant laws, possessory lien laws and motor vehicle laws and regulations to enable landlords in such cases to seize the unit, hold it for a reasonable time, and then sell it at public auction on site to raise money to bring rent current and get a paying tenant,” he explained. “Often no one shows up for these sales and the landlord bids in what is owed and gets title to the unit which can then be fixed up and re-sold. We use this procedure in several hundred cases a year for park landlords.”

Parham has also used his decades of expertise to weigh in on other cases, one of which was the 2013 state appellate case of Stagecoach Trails MHC LLC v. City of Benson, which held that when a park was old and did not comply with current zoning, the entire park was a nonconforming use. The court’s ruling in this case ultimately put a stop to local zoning bodies trying force older parks out of business by enforcing current land-use and zoning requirements on older parks.

“Nonconforming uses of land can be continued despite subsequent zoning changes that would otherwise force the land owner to comply with upgraded zoning,” Parham said. “Nonconforming use means that the landowner is protected from compliance with the new ordinance so long as the park complies with the old one in force when the park was developed.”

Parham was born in California, but moved frequently growing up because his father was in the U.S. Marine Corps. He graduated from Tulane University Law School in New Orleans in 1967.

He has been actively involved with Arizona Association ARVC since its earliest days, when it was known at the Arizona Travel Parks Association. The association provides education, government affairs and marketing services RV parks, resorts and campgrounds throughout Arizona. It also publishes the Arizona RV and Camping Guide and hosts GoCampingInArizona.com, the travel planning website.