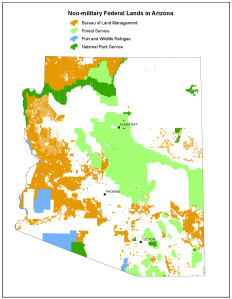 Arizona voters rejected a bid by some special interest groups to claim control over 27 million acres of federally managed public lands. The orange colored land is overseen by the Bureau of Land Management, the dark green by the National Park Service, the blue by the Department of Fish and Wildlife and the light green by the U.S. Forest Service. Map courtesy Center for Biological Diversity.

Proposition 120, a ballot initiative in Arizona aimed at claiming state control of federally managed public lands in the state criticized by most as a massively expensive land grab, failed at the polls this week, as voters rejected the amendment to the Arizona Constitution that would have declared the state’s sovereign and exclusive authority and jurisdiction over the air, water, public lands, minerals, wildlife and other natural resources within the state’s boundaries.

The initiative was supported by some of the usual suspects in western public lands battles, including the Arizona Farm Bureau, which was on record as saying that its members are frustrated with “federal mismanagement” of public lands.

Supporters claimed the measure would have increased the state’s ability to improve the management of public lands, while critics saw it as a bid to privatize some lands and allow unfettered logging and mining in other areas.

Critics in Arizona said the measure would have been extremely costly for the state, which barely has the resources to manage lands already under its control. It’s very likely the law would have been invalidated by courts as a move that’s preempted by federal law.

“Public lands in Arizona harbor some of America’s most iconic national parks, rivers, forests and wildlife,” said Taylor McKinnon, public lands campaigns director with the Center for Biological Diversity. “Handing those lands over to Arizona would be a disaster for national treasures like the Grand Canyon and native animals like the Mexican gray wolf.”

Those lands and waters also include habitat for 78 imperiled species, including Mexican spotted owls, jaguars and Mexican gray wolves, protected as threatened or endangered under the federal Endangered Species Act. Along with other wildlife, these species’ management would be seized by the state, eviscerating their recovery plans and millions of acres of critical habitat designated to recover them.

Article VI, Clause 2 of the U.S. Constitution — known as the “supremacy clause” — establishes federal law as “the supreme law of the land… anything in the constitution or laws of any state to the contrary notwithstanding.” Since 2010 Arizona has closed or curtailed services at several state parks owing to budget shortfalls and legislative slashing; two parks remain closed today and several continue curtailed services.

“Proposition 120 is unconstitutional,” McKinnon said. “Its passage would unleash a blitz of litigation that Arizona can neither win nor afford. Legislators would better spend time getting the state’s own parks back up and running.”