By: Woodall's Campground Magazine|Published on: May 25, 2011|Categories: Industry News| 0 comments 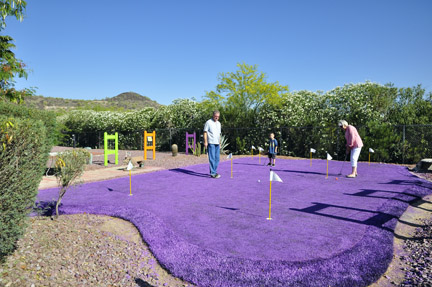 Yes, folks, the "green" is purple!

Phillip Harison has been coming to Desert’s Edge RV Village in Phoenix almost every winter for 15 years.

Harison loves the Arizona sunshine and the park’s amenities, which include a heated swimming pool and spa and exercise room. But he has also been lobbying park owner Saundra Bryn for years to put in a putting green, according to a news release.

“Every time when I arrived in the fall, I would whine, ‘Where’s my putting green?’ “ Harison said.

Bryn finally relented and hired Atlanta, Ga.-based Southwest Greens to install a putting course, which was completed a couple of weeks ago. But she did it her way.

Tom Stuckenschneider, a 16-year sales veteran for Southwest Greens, says Bryn’s putting course is likely the only “putting purple” in Arizona, and possibly North America, for that matter, which suits Bryn just fine.

In addition to being her favorite color, the “putting purple” nicely complements her park’s purple fences as well as its purple table legs and tablecloths. It also echoes the colorful grandeur of Arizona’s mountains and skyline at sunrise and sunset. It also affords numerous marketing opportunities.

“I’m going to have T-shirts and visors made that say, ‘Have you played the putting purple at the purple park?” Bryn said, adding that she is also planning to host putting tournaments.

Harison, for his part, is quick to assert he had nothing to do with the color selection for Bryn’s putting course. But he says he’ll be the first to try it out.

“I do expect one thing,” Harison said, “The hole will stand out more because of the color. I’ll be interested to see if this helps me concentrate better on distance.”

“I think it will be a wonderful addition to the park,” said Inge Gosnell, a snowbird from Illinois who spends the winter at an RV site right next to the putting purple. “People will definitely notice it when they come into the park.”

Gosnell added that Bryn can develop a side business supplying golf clubs for RVers who don’t have their clubs with them or would simply like to try their luck on a putting purple.