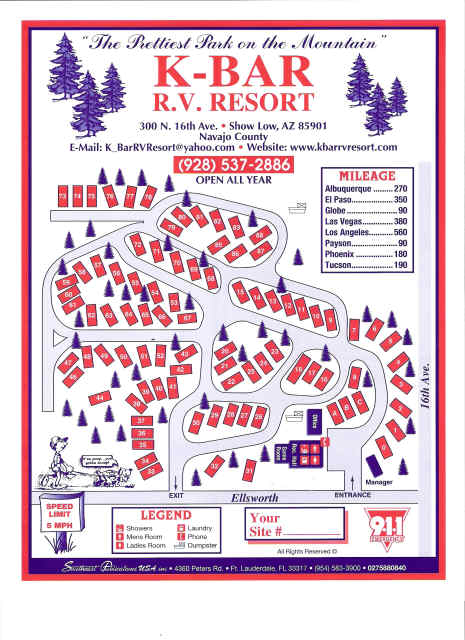 K-Bar RV Resort in Show Low, Ariz., is one of 12 businesses honored Thursday (March 29) during the 2012 Success Awards and Legislative Lunch at the Arizona state capitol in Phoenix.

The event was hosted by the Arizona Small Business Development Center, the White Mountain Independent reported.

K-Bar RV Resort is owned by David and Suzanne Mann. The Manns purchased the resort in 2008.

Mann said he learned about the award in November when he got a call from Tracy Mancuso, regional director for the Northland Pioneer College Small Business Development Center (SBDC). He said he had worked with Mancuso for six months to put together a comprehensive loan proposal for long-term financing.

Mann, who owns another RV park in Camp Verde, said Mancuso nominated him for one of the Success Awards, possibly because of the improvements he has made to K-Bar RV Resort since buying it. Since taking over, he said he improved the lighting and the roads and has remodeled the restrooms, laundry area and the community room to include a kitchen, all to “enhance the appeal of the park.”

In this economy, Mann said the qualifications for loan have become stricter, so he was pleased not only to get a loan but one with favorable terms. He said he thanks Mancuso for her help in securing that loan.

“She’s looked favorably upon my business,” he said. “Her background is that of a banker.”

Mann said he has worked with the local SBDC before and has been nothing but pleased with their efforts. He said their assistance with K-Bar RV Resort is no exception.