By: Woodall's Campground Management|Published on: May 7, 2012|Categories: Industry News| 0 comments

Unable to rely on state funding, supporters of the Arizona state parks system launched an initiative drive May 4 to get Arizona motorists to provide the needed funds.

The heart of the proposal revolves around a $14 surcharge added to the cost of each vehicle registration fee. That fee is voluntary — but motorists would have to affirmatively opt out by checking a box on the renewal form to avoid paying it, the Yuma Sun reported.

Bill Meek, president of the Arizona Parks Foundation, said states with similar systems manage to get anywhere from 40 percent to 80 percent of drivers agreeing to the additional fee.

Meek had no specific figures of what the fee might raise. But a 2009 report estimated that even if half of motorists opt out, that could still raise $40 million a year.

The proposal comes after years of state lawmakers not only refusing to provide state funds to operate the parks but on several occasions actually taking away the money the parks system raised itself in fees, putting the cash toward other budget priorities.

This measure seeks to have any money raised avoid that fate: It contains a provision saying the funds “are not subject to legislative redirection, reallocation reappropriation” without getting specific voter approval.

Backers of the initiative, which Meek said does not yet have the endorsement of the Parks Foundation, have only until July 5 to gather 172,809 valid signatures to put the issue on the November ballot.

Meek acknowledged that kind of effort is going to require hiring paid circulators.

He said major donors have not yet been lined up. 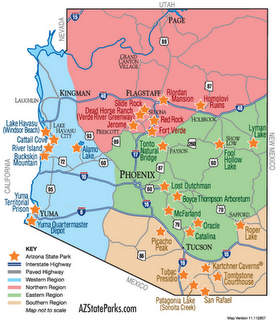 The orange stars mark the location of state parks in Arizona.

“Many people who I think are going to be interested in contributing simply wanted to see the provisions first,” Meek said. “And we just got the provisions done a couple of days ago.”

Meek, a long-time lobbyist, said he believes key Arizona businesses can be persuaded to pony up some cash.

“We’ve got pretty strong arguments and pretty good documentation for the economic benefits of outdoor recreation, parks and open space,” he said. “I think the corporate community, when they see that, will feel this is a pretty important item.”

The idea is not new and was first suggested in 2009 by a special task force in a recommendation to Gov. Jan Brewer. That report said the parks system “is threatened with extinction and cannot survive under a roller-coaster system of financial support.”

A version of the idea for a mandatory fee even gained the support the following year by the House Committee on Natural Resources and Rural Affairs. But the full House refused to go along — or even send the question to the ballot.