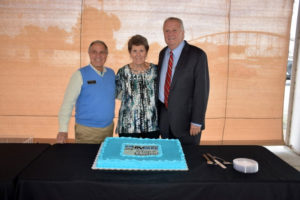 On Oct. 25, in North Little Rock, Ark., city leaders, local business and community leaders, longtime RV park supporters and many other friends helped the Downtown Riverside RV Park (DTRSRV Park) celebrate the tenth anniversary of an RV park, according to a press release.

“The park is an unusual experience for RVers, who mostly have to stay in secluded, natural areas,” said Bob Major, president & CEO of the North Little Rock Convention & Visitors Bureau (CVB). “Here, guests can park on the Arkansas River with a view of the city skyline, watch the river bridges light up at night, ride their bikes on the Arkansas River Trail and jump on a streetcar to dining and entertainment – all without having to unhitch their Jeep.”

“That five-day event showed the potential for a permanent RV park that would attract RVers from all over the U.S.,” Major said. “Ten years later, the park has transformed into a must-stop not just for American RVers, but international visitors as well.”

The park earned a 2018 TripAdvisor Certificate of Excellence for consistently positive reviews and is currently ranked as the best specialty lodging in North Little Rock on TripAdvisor. In September 2018, the park won a Prism Award from the Arkansas Chapter of the Public Relations Society of America for its website redesign.

More than 40,000 RVers from all 50 states and several countries have spent an average 11,300 nights per year at the RV park. The success of the park shows no sign of stopping: occupancy has increased by 34% over the past five years. By 2020, the park is expected to pass the mark of 8,000 RVs per year.

Smith started the celebration by recognizing the RV park’s Manager, Sheila Bullerwell, for overseeing the park daily for the past ten years.

“When people pull in here to visit our city, their first impression is Sheila,” said Smith. “And she has done a marvelous job.”