Wildfires and rampant rains have had a “negative impact on tourism in many parts of Colorado,” reports Mary Arlington, executive director of the Colorado Campground and Lodging Owners Association.

“While nearly all campgrounds have not been closed or evacuated this summer, 2018 cancellations have been off the charts,” she noted to Woodall’s Campground Management (WCM).

While wildfires have been burning in Colorado for months, destroying thousands of acres of land, according to The Denver Post, heavy rain on Tuesday (July 17) caused even more damage in Durango, Colo., as mudslides forced the evacuation of the Durango North/Riverside Kampgrounds of America (KOA), in north Durango.

The mudslides were caused in part because of the 416 wildfire which has been burning near the area since early June.

“The fire was the first threat that caused countless cancellations during this always too short camping season,” said Arlington. “The smoke then deterred many more from traveling to the area.”

U.S. Highways 550 and 160 were closed for a period of time due to the mudslides, but were reopened, which is a good thing for the small communities and campgrounds in the area, noted Arlington.

“In this mountain area, where roads are scarce, U.S. Hwy. 550 is of utmost significance to the businesses between Durango, Silverton and Ouray,” she explained. “These small communities can be paralyzed without Hwy. 550 and all of the businesses suffer greatly with the surge of negative conditions. 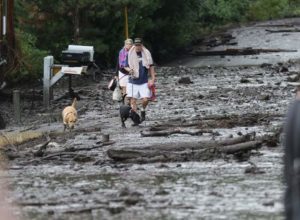 A couple walk their dog out of the Durango North KOA that was evacuated on Tuesday (July 17).

“The professionals involved in recovery, from firefighters to road workers, are doing a remarkable job with these challenges,” Arlington continued. “We just hope those who cancelled their plans will adjust their plans yet again. Remember, camping doesn’t end on Labor Day. The aspen trees are a sight to behold as they change colors in the early autumn. Festivals, fishing and hiking continue. ATV trails remain open and when winter sets in and many places close, some campgrounds remain open for those who enjoy ice climbing or hot springs.”

Mike Gast, vice president of communications for Billings, Mont.-base Kampground of America Inc. said that the owners of the Durango North KOA had recently purchased the park after selling their KOA near Yosemite National Park.

“So far they have had the fire and now this,” he told WCM. “They are just being allowed back on the site. It doesn’t look good and it will depend on how fast the cleanup can go as to how fast they can get back in business.”

On the Durango North KOA website they have posted this notice to campers: “Campground is closed due to mudslide. Do not return or arrive to the campground until further notice. Phones at the campground are not working, so please communicate via email – [email protected]”