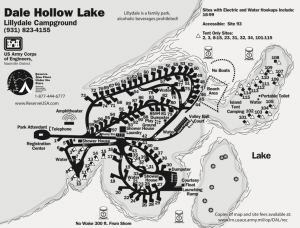 Lillydale Campground on the shores of Dale Hollow Lake near Allons, Tenn., features beautiful waterfront campsites and is a favorite getaway spot for thousands of campers every year. With its breathtaking wide-open views, it’s hard to imagine that just over a decade ago it looked more like a war zone than a favorite camping destination, dvidshub.net reported.

The U.S. Army Corps of Engineers Nashville District closed the campground for the entire 2001 recreation season when an army of southern pine beetles infested 1,200 mature loblolly pine trees that provided plush shade for visitors. Another 300 pines were also removed from nearby Willow Grove Campground, but it remained open.

“It basically devastated 90 percent of loblolly pine coverage of the (Lillydale) campground,” said Dale Hollow Lake Park Ranger and Environmental Protection Specialist Sondra Carmen. “So in 2001 the Army Corps of Engineers at Dale Hollow had to close the campground in order to remove the dead trees, reestablish the campsite, provide for public safety and open up an opportunity for better camping than before.”

Click here to learn now the campground was reborn over the past 10 years.