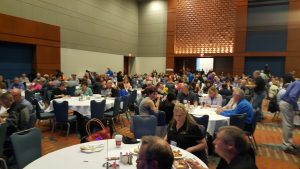 Hundreds gathered for the 2017 Outdoor Hospitality Conference and Expo.

Hundreds of National Association of RV Parks and Campground Association (ARVC) members spent this past week (Nov. 6-10) at the Raleigh Convention Center in downtown Raleigh, N.C. at the 2017 Outdoor Hospitality Conference and Expo (OHCE) meeting old friends, attending educational seminars, perusing new products and hearing updates on how the RV park and campground arena is faring.

Leading off with an association update during the OHCE’s opening breakfast on Tuesday (Nov. 7) was ARVC CEO Paul Bambei, who said that ARVC is focused on keeping and building momentum as the Colorado-based trade group looks to the future, while working to engage local, state and national officials.

“We held the first ever state leadership meeting last February,” said Bambei. “We hosted state executives for two whole days and we laid out our plans for 2017. We have a dedicated staff that also works every day to keep an eye on state and local regulatory issues. In 2017, we reviewed around 10,000 issues, with around 400 of them designated as being critically important.”

While the past year has been a growth year for many campground operators, the conference again enabled park owners to step away from day-to-day operations long enough to smell the roses, so to speak, and gear up for what is likely to be a busy 2018.

“OHCE gives people a chance to really bond within the industry,” ARVC Chairman Tim Deputy, general manager of Myrtle Beach Travel Park in South Carolina, told Campground Management (WCM). “I mean, if you look at it, I always say there’s probably tens of thousands of years of experience in this room. You can’t pay for that and it’s every year, when you come back and you just reconnect with people and share your good times and bad times. There’s nothing that can surpass that.”

The keynote speaker Danny “Chocolate” Meyers, had worked with a number of different NASCAR drivers, including Dale Earnhardt Sr.

And with ARVC’s Outdoor Hospitality Education Program receiving full accreditation in October 2016, this was the first year where ARVC could implement educational courses that allowed members to receive college credit for the seminars they attended. 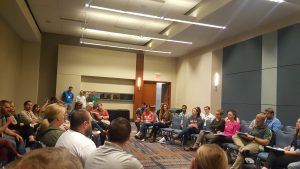 With over 50 seminars on the schedule, in turn, it was probably a challenge for some park operators to figure out which ones to attend, with sessions delving into everything from ADA compliance, dog parks, emergency planning and hiring practices, just to name a few.

Gary Quigley, who owns and runs Yogi Bear’s Jellystone Camp-Resort at Kozy Rest in Harrisville, Pa., said the education he gets from coming to the conferences is invaluable.

“When we bought the place 18 years ago it was extremely run down,” he said. “It had very little business. Actually, we thought my dad had a mid-life crisis when he wanted to get into this. We thought he just lost his mind. He sold everything he owned, took a risk on a place that was run down, all his eggs in one basket and we went to work and we got better by coming to the conferences, going to the national campground management school and going to the 20 Groups.”

Quigley who has been presenting at the conference for the last eight years and this time led a session on “Shoulder Season Opportunities”, said  he loves being able to share information with other members.

“Everybody’s helped us get to where we are, and I love helping others do the same,” he said.

ARVC also continued to engage their Young Professionals group during the OCHE, something that started during last year’s conference. A “Get Involved Mixer” on Monday evening and a “Cracker Barrel” session Tuesday allowed young professionals to see how they can be a part of ARVC and exchange ideas on the industry.

Participants at the “Cracker Barrel” asked questions and heard feedback from the other individuals in attendance. Some of the topics included the use of social media and how to engage and retain employees.

Hannah Ehlen, manager of Evergreen Campsites and Resort in Wild Rose, Wisc., a young professional herself, said she was encouraged and inspired to see ARVC engage with young professionals in the campground industry.

“It should be very empowering to those that participate in the program,” she said, “because they’re being given an opportunity to come to conference, to network with some of the industry professionals that have been doing it 30-plus years, people that have owned successful parks.”

Next year’s expo is going to be held from Nov. 5-9 in Oklahoma City, Okla.