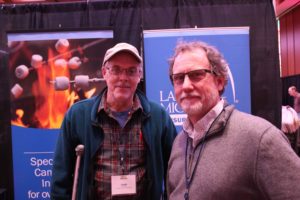 As good of a camping season as last year was, officials with the Association of RV Parks and Campgrounds of Michigan (ARVC Michigan) are forecasting an even better year in 2019 for member campgrounds — and for the organization as a whole, as this will be the first full year for ARVC Michigan’s new executive director, Greg Katt.

The addition of Katt fills a huge need for ARVC Michigan as the association had been without an executive director for the last several years.

Hired in October 2018, Katt is a familiar face to many Michigan campground owners as he had been with Katt Insurance, Belmont, Mich., for nearly 20 years prior to joining ARVC Michigan. The firm, founded in 1989 by Katt’s father, Claude — who sold the company to Lake Michigan Insurance Agency in January of 2017 — had specialized in providing insurance services to Michigan campgrounds.

Katt said his biggest goal is to increase membership, and he plans on touring as many campgrounds as he can this year to accomplish that mission.

Katt is hoping ARVC Michigan will undergo a bit of a revitalization as he also intends to upgrade the website, introduce certain technologies, institute different marketing ideas, and just “bring it forward, because I think the organization’s been just kind of bumping along for quite a while,” he said.

Mentioning that the group enjoyed an uptick in membership last year to about 140 campgrounds, ARVC Michigan President Tim Wilcox, owner of Gateway Park Campground in Hillsdale, Mich., expects Katt will succeed in those goals.

“For every association, enrolling members is by far our No. 1 plan. In all his years in insurance, Greg has the pulse on a lot of campgrounds in Michigan and has been in a lot of campgrounds. We’re looking forward to him reaching out and talking to these people, getting maybe some more people involved,” Wilcox told WCM.

As far as the 2019 camping season itself, Wilcox said that the demand for campsites remains at unprecedented levels fueled by brisk RV sales over the last several years as well as people’s growing interest in the familiar benefits of camping.

“Every campground was busy. Everybody had a great year. The weather was fantastic and camping is growing,” said Wilcox, who’s been in the campground industry for 28 years.

With Katt now on board, Wilcox mentioned he’s anticipating continued progress in advancing ARVC Michigan’s efforts at working with state agencies and legislators on campground-friendly rules and regulations. One of the biggest efforts is a complete rewrite of the state’s campground oversight regulations, enforced by the Department of Environmental Quality (DEQ). The effort is several years in the making and Wilcox said they hope to secure legislative sponsors and have it introduced as a bill early this year.

“Hopefully, there are no hiccups and we can get that running through,” Wilcox said. “We’re also working on another piece of legislation right now to reduce the amount of groundwater discharge, which would help a lot of campgrounds being able to expand because we’re dictated by our septic systems. If we could reduce that amount a little bit, then we could add some more sites fairly easy, but when you’re talking $30,000 to $40,000 for a new septic system, that’s a little bit harder bite to chew. We’re at that point now where we’re just waiting. I’m waiting myself to see what happens with the groundwater discharge before I go and engineer a bunch of new sites.”

Wilcox, whose campground has 99 sites on 130 acres including frontage on a 90-acre all-sports lake, said it would cost him about $10,000 per site. Part of that is because Wilcox would add Wi-Fi and other higher-end amenities, but the bulk of the cost is due to the onerous regulations and requirements, he said.