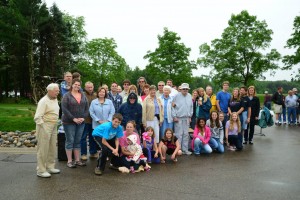 Lori Tews, executive director for the Association of RV Parks & Campgrounds Michigan (ARVC Michigan), already has had one very busy summer – and it’s not even close to being done yet.

Tews, who’s been in her position since 2012, spent several days in June and drove a little less than 1,200 miles while visiting 42 campgrounds in the southwest part of Michigan – including 16 in one day. She will take off on similar trips this month and in August, and by the time summer is over she’ll have logged about 2,000 miles and visited 72 campgrounds in 14 counties, including many that are not members of ARVC Michigan.

“Our members appreciate having the executive director come out to visit them,” Tews said, adding the trips were a practice of previous executive directors as well. Members aren’t always able to attend ARVC Michigan conferences and events, she added, and this is a way for the association to come to them. At the same time, Tews is also knocking on doors of non-member campgrounds to introduce them to the benefits provided by the state and national ARVC associations.

“It’s definitely a lot of fun to get out there and talk to people and introduce myself and really start that dialogue with campgrounds that aren’t familiar with ARVC Michigan or national ARVC, but at least I’m introducing them to those organizations,” Tews said. “Or, if they know a little bit about them, explain a little bit more in depth about membership and what’s available to them.”

Planning each trip is simply a matter of using a list of parks provided by the state’s Department of Environmental Quality, which provides governmental regulatory oversight and maintains a list of registered campgrounds, and plotting a course using Google maps. Tews stays at ARVC Michigan-member campgrounds during the trips, which serve as home base while she spends each day visiting other parks in the area. She tries to limit each trip to days earlier in the week, avoiding weekends when campground owners are typically too busy to meet with her.

For her June trip, Tews drove nearly four hours from her home near Grayling, Mich. to Gile’s Campground on Swan Lake in Allegan, Mich., which served as home base while she visited area campgrounds. From there, Tews moved on to Timber Trails RV Park in Decatur, Mich., where she stayed a few days while visiting more campgrounds. The final stop was Klines Resort in Three Rivers, Mich., where she stayed throughout the weekend. Tews again visited several area campgrounds, but the trip also coincided with Klines celebrating its 50th anniversary, for which Tews was able to participate in a ceremonial ribbon-cutting event.

Tews, who grew up camping in tents and pop-ups, is making use of an RV for her excursions. Earlier this year she purchased a 22-foot 2014 Eco Camp travel trailer by Skyline Recreational Vehicles from International RV World in Bay City, Mich. She says it’s the perfect size for her, and she appreciates being able to tow it with her father’s Chevrolet Colorado pickup truck equipped with a backup camera.

“I love it. I traveled in June by myself, and obviously I have a small camper. I don’t have a huge fifth-wheel. I have a 22-foot. It’s perfect for one or two people. And I loaded and unloaded it myself. People ask, ‘How do I check the brakes?’ Well, if I put two heavy blocks on the pedal and I can run back and check, “Yep, it’s working,’” she explained. “I put it up and take it down all by myself. From leveling it to emptying the tanks out, I do it all and this is my first time ever doing it. Yeah, I really, really enjoy it.”

Tews said she hopes to visit campgrounds in the Upper Peninsula next summer.

“We have so many great campgrounds in the state of Michigan, and there’s a campground for everybody out there. For the campers out there who enjoy the primitive-style of camping – no electricity, no water – there’s plenty of campgrounds they can find. Your family oriented campgrounds, your RV super resorts – there’s multiple campgrounds all over this state for every camper,” Tews said. “And it’s everywhere. It doesn’t matter where in this state you go, there’s a campground for everyone and they all will have that ‘Up North’ feel. They all have that piece of heaven. Michigan campgrounds offer the serenity and the peace and the calm and the relaxation, and it doesn’t matter where you go.”

“We have this page, why not start promoting our campgrounds and introduce the public to the campgrounds who are members of the association?” Tews said. “It’s great to see our fan base improving, and I notice people are making a lot of comments, saying ‘This is a great campground,’ and people are sharing the post and tagging their friends and saying, “Hey this looks like a nice place, maybe we should try this place out.’”