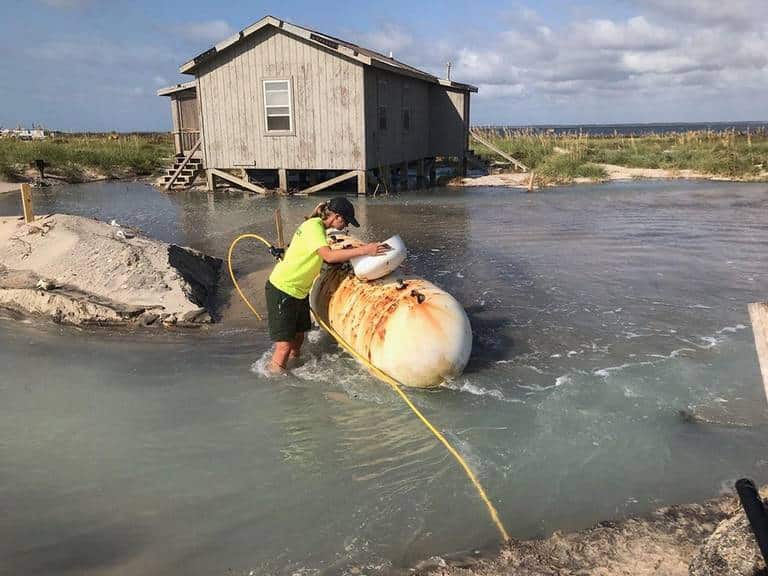 Hurricane Lorenzo and king tides are flooding areas of the Outer Banks in North Carolina. In this photo, a park maintenance worker at Cape Lookout rushed to stop a propane tank from being swept away.

The Outer Banks in North Carolina are seeing “extreme high tides” and dangerous flooding due to a hurricane that is nearly 2,700 miles across the Atlantic Ocean, according to the National Park Service.

Park rangers at Cape Lookout and Cape Hatteras posted photos Monday (Sept. 30), revealing Hurricane Lorenzo in the North Atlantic is making most of North Carolina’s beaches impassable at high tide, according to The Charlotte Observer.

The surge is also refilling unwanted new inlets cut through Cape Lookout National Seashore by Hurricane Dorian. Those inlets essentially cut the islands into pieces and the park service has been hoping they would fill in with sand.

Cape Lookout park officials say Hurricane Lorenzo surge is being compounded by king tides, the higher-than-normal tides that occur when the moon is closest to the Earth.

The park posted photos of ocean water rushing through one of those inlets between rental cabins and “breaking through the small dunes.” The storm is also creating extremely dangerous rip currents that are often linked to drownings off North Carolina.

“Today the King Tide over washed the islands in several places, including into Great Island Cabin Camp where it tried to steal a propane tank,” Cape Lookout posted with the photos.