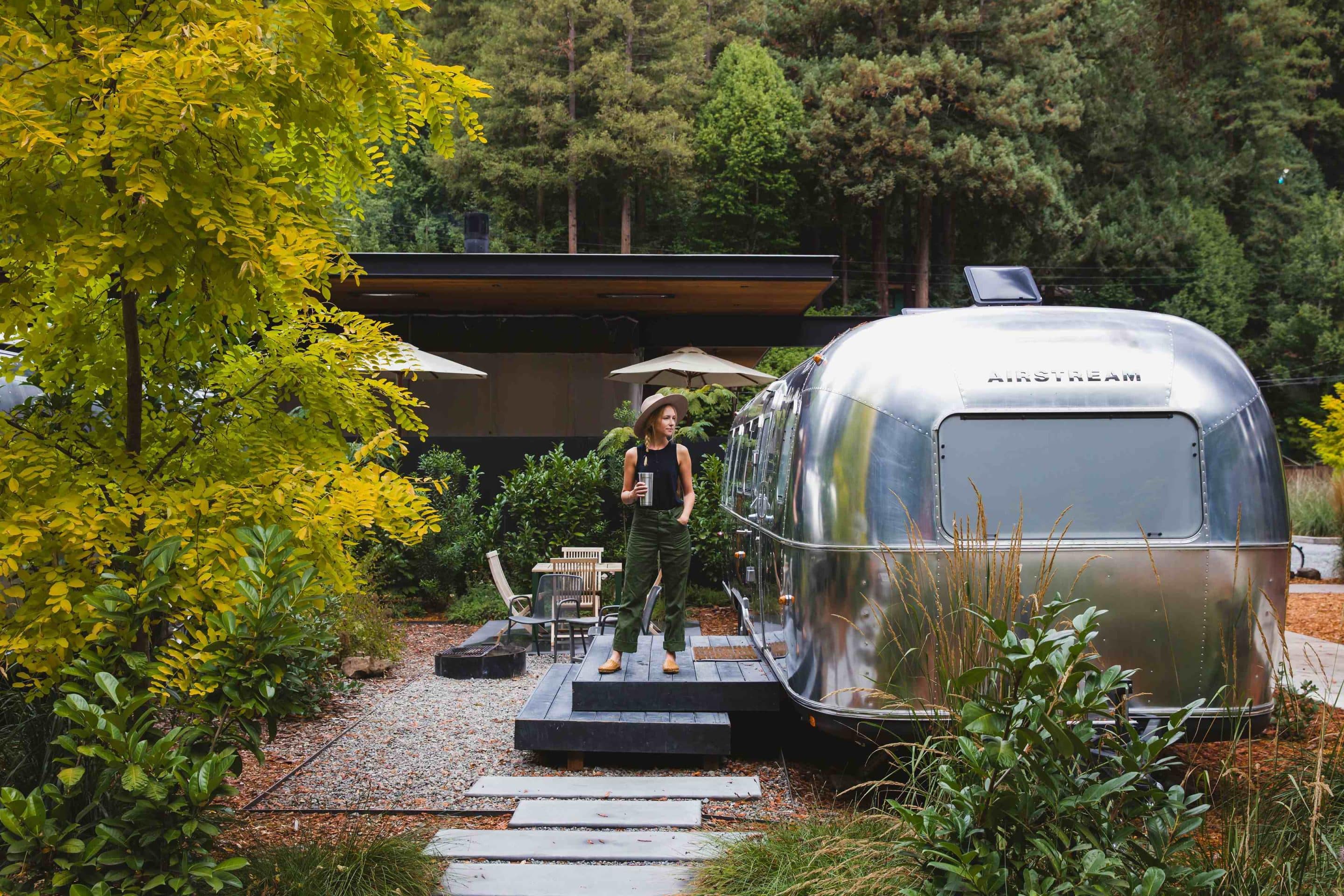 An Airstream trailer at AutoCamp's Russian River Valley park.
The popularity of the Airstream brand has given rise to a boutique business model in the outdoor accommodations sector — high-end, Airstream-exclusive RV parks

While several such campgrounds exist to various degrees around the world, one making headlines lately is AutoCamp, which offers luxury amenities in all three of its California locations including downtown Santa Barbara, in the Russian River Valley in the heart of Sonoma Wine Country, and the newest property in Midpines outside Yosemite National Park, which opened June 10. Each AutoCamp location offers a variety of Airstream travel trailers; six in Santa Barbara, 23 in Russian River and 80 in Yosemite.

The accommodations are targeting travelers who appreciate the finer things in life. Each unit is referred to as a suite, and rates range from a little more than $200 for an early-week rental in the off-season to nearly $500 for a Friday night stay during peak season.

“Our goal is to make getting outdoors easy and to connect people to the outdoors and each other. So, we came up with the idea of renting out Airstreams for nightly stays to guests when we opened our Santa Barbara property in 2013, and we found out just how successful we can be by making this a plug-and-play Airstream experience and taking the guesswork out of towing a trailer,” said AutoCamp Partner/Co-Founder Ryan Miller, who acknowledged its business model has proven out.

“I can’t share numbers, but I can tell you that the business model is proving successful judging by the variety of metrics, financial included,” he continued. “But I think what’s really interesting is just seeing the customer demand and just the sheer interest in staying at an AutoCamp at any of our three locations. How many reservations are actually coming through? Thousands per month.”

In fact, buoyed by $115 million in equity commitments earlier this year from Whitman Peterson, a real estate investment management company, Miller added that AutoCamp is “rapidly expanding at this point.” He preferred not to disclose any more expansion details including potential locations, but mentioned the company is “looking for development partners nationwide to help expand AutoCamp.”

Related to this, AutoCamp in June expanded its executive team with the hiring of Anjali Agarwal, as chief operating officer, and Todd Wynne-Parry, as chief growth officer. AutoCamp Founder/CEO Neil Dipaola said “with their leadership, we’re excited to take AutoCamp to the next level in bringing an innovative outdoor hospitality experience to travelers across the nation.”

Also looking forward to AutoCamp’s continued expansion is Airstream President and CEO Bob Wheeler, who said the manufacturer is excited at the prospects of expanding further into this burgeoning fixed rental segment.

“As we look at ways to grow the brand beyond just the RV space, this is a space we’re paying very close attention to,” Wheeler told WOODALLSCM.com.

“There’s been this movement over the past six or seven years, this idea that camping could go upscale — ‘glamping’ if you want,” he continued. “There are many campgrounds that have put in yurts and fancy tents and cabins and whatnot, but there’s a segment of this movement that’s focused around the brand experience that Airstream delivers. We’ve had some inquiries from smaller groups wanting to put 10 or 20 here and there on a case-by-case basis, but the AutoCamp group came to us. They’re out there acquiring properties, some are rundown campgrounds, and then converting them to Airstream-exclusive camping experiences.”

A key aspect to AutoCamp’s accommodations are that the units have been specially manufactured by Airstream for AutoCamp as a permanent rental accommodation, which primarily means the trailers aren’t intended for travel and they have a direct connection to municipal utilities. As Wheeler noted, “it’s still an Airstream, but it’s not an RV.”

The idea, explained Miller, is to provide a highly pampered Airstream experience to guests without the worries associated with certain aspects of RVing.

“The main focus of the trailer design is to simplify the usage and the experience for guests and, secondarily, we’ve incorporated our signature design elements: mid-century modern interiors, spa-inspired bathrooms, and private full-size bedroom with the queen-size bed,” Miller said. “We found that there’s just as much intrigue from our guests about staying in an Airstream and actually getting that Airstream experience even if it’s a slightly modified interior.”

“Let me tell you, for example, about their Russian River Valley location,” Wheeler inserted. “It’s all folks driving there from San Francisco, urban hipsters. They’re not RVers, never will be. They want to have a fun, unique experience in nature, out in the Redwoods, in wine country. It’s a market we would never see as an RV company otherwise, and we’re able to tap into it through these kinds of partnerships, where these fixed location Airstreams are being developed and marketed as hotels.

“And, more importantly, the money’s coming in to support this idea,” he added.