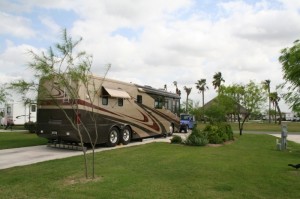 One of the RV sites at Bentsen Palm Village RV Resort in Mission, Texas.

The National Association of RV Parks and Campgrounds (ARVC) awarded the resort located near Bentsen-Rio Grande Valley State Park with its national “Medium Park of the Year” award Nov. 30 in Las Vegas, The Monitor reported.

The association looked at the village’s customer service, employee training, operational excellence, national directory ratings and community service in rating it the best, according to a news release from the national association.

About 3,000 campgrounds and RV parks are members of the association and awards are given for the best small, medium, large and mega parks, said Jeff Crider, a spokesman for the organization.

“It is an honor to have this kind of award. There aren’t that many parks that qualify each year,” Crider said. “In the industry itself it’s considered a big deal.”

Bentsen Palm Village is a part of the Bentsen Palm Development, a master-planned community covering 2,500 acres, and has a variety of activities for residents, most of whom are Winter Texans.

Juanita Carvajal, who manages the park along with her husband Guy, said she thinks it’s the customer service that put Bentsen Palm Village on top. The 250-site campground also earned the Texas RV Association’s “Medium Park of the Year” rating in August.

“We tried to get across the whole RV organization that our guests come to us first of all,” she said. “It’s a beautiful lush park of native landscaping that attracts the birds and butterflies, but also because we want to make (the residents) feel at home.”

Texas Department of Parks and Wildlife designated the campground as a Texas Wildscape, meaning it sustains native plants and animals. The park is home to the Elf Owl, which is not commonly seen.

The parks managers have improved facilities and other services after receiving suggestions from residents, Carvajal said.

The RV park includes a dog park, community gardens, a large craft room, walking trails, a woodshop, free access to the state park, free kayaks and bikes for use, a shooting range, pontoon boat rides and more. Residents can bring their own RV, store it at the park, or live in a permanent cabin or a casita —an upscale one-bedroom house.

Carvajal said the activities cater to a changing Winter Texan crowd that wants to remain in the thick of things.

“Now they’re very active and much younger at heart,” she said.

David Muscat, a Winter Texan from Ontario, Canada, said he and his wife enjoy hiking and biking, so the park is a good fit for them.

“You’re surrounded by people who like doing the same things,” he said while at a park-sponsored margarita night.

He said he also enjoyed the park’s quiet atmosphere.

Carvajal said the quiet has been a draw for many residents. Sitting at the end of Bentsen Palm Road, the area does not see much traffic, but residents are still about 10 minutes away from shopping centers.