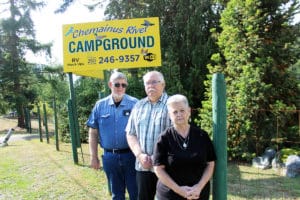 Chemainus River Campground owners John Wyatt (back) and Jeri Wyatt (front) have been backed by former Member of the Legislative Assembly (MLA) Bill Routley (middle) in their pitch to remain open as a campground.

A British Columbia council is putting its full-fledged support behind the owners of the Chemainus River Campground in Chemainus, who face a deadline from the Agricultural Land Commission (ALC) at the end of the month for the property to cease being a campground and revert back to agricultural status, according to the Victoria News.

So is Bill Routley, a former Member of the Legislative Assembly (MLA) and longtime friend of owners John and Jeri Wyatt, who wants to see what he calls an “injustice” corrected.

So are countless campground patrons numbering more than 1,000 who’ve signed a petition since August — not to mention countless others who’ve called or emailed to voice their displeasure with the decision.

This all started when the Wyatts made an application to expand the number of sites at the popular campground and the ALC seemed bewildered by its operation outside of pure agricultural use.

North Cowichan council passed a motion at its Sept. 4 meeting to direct staff to submit a notice to the ALC under Section 29 of the ALC Act to exclude the Chemainus River Campground lands from the Agricultural Land Reserve.

The letter will emphasize shutting down the campground would result in a loss of temporary and permanent housing which is unreasonable given the current housing crisis; the land was forested and never previously used for agriculture purposes; and the existing water licence, which permits 1,000 gallons a day from the Chemainus River for domestic use, would not support agriculture use without a substantial increase to the water licence to accommodate agriculture use during the growing season and that resource is obviously severely tapped.

Siebring will also attempt to arrange meetings with provincial representatives at the upcoming Union of B.C. Municipalities convention, but time is clearly of the essence for the Wyatts.

“It never had agricultural capacity,” noted Siebring of the land.