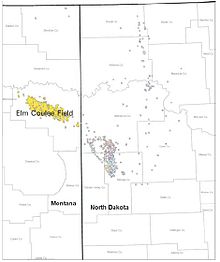 The palatial fifth-wheel camper trailers on Tour America’s lot in Billings, Mont., certainly take the “rough” out of roughing it.

There’s camping rough, Bretz explained, and then there’s Bakken rough, living full time through the winter on the frozen prairie of Montana and North Dakota, where more than a few days of arctic weather are normal.

Oilfield camps are dotted with fifth-wheel recreational trailers shielded with foam-board insulation and whatever else workers can muster to keep water pipes and waste tanks from freezing.

“Winter time can run as cold as 30 below zero, and a lot of RVs aren’t made for that,” Bretz said.

So, Tour America started looking for one that was and came up with a Camp Lodge, Work and Play fifth-wheel custom built for the Bakken environment.

“These go relatively quickly,” Bretz said, directing to conversation to a trailer resembling a super-sized version of what contractors commonly haul their gear in. “It has 2 to 3 inches of spray foam on the lower chasse, heated water lines and holding tanks. They have dual-pane windows, like your house. This is a niche product.”

Bretz has the rugged trailers, which retail for about $34,000, parked north of his main lot in full view of eastbound Interstate 90, where semis loaded with drilling equipment and bentonite are streaming to the oil patch. His show-pony RVs are in Tour America’s corral, not so easily spotted from the freeway.

Housing of all kinds is scarce in the Bakken oilfield, where high-paying jobs have lured thousands of transient workers. Real homes are hard to come by, but so are campers and trailers. The running joke is that the oilfield holds the record for homeless people with $100,000 incomes. At a western North Dakota housing summit last spring, developers identified the need for 5,000 homes over the next two years.

That insatiable demand for housing of all kinds has become good business for Billings companies with products ready to sell. Pierce Homes now markets a modular model named for the Bakken and built by Commodore Homes. At Canadian-American Structured Solutions Inc. (CASS), the demand for oilfield housing drives a significant portion of the recently created company’s business.

“I would say the fallout from the Williston area is 25% of our business,” said Larry Nelson, CASS investor and CFO.

CASS, which set up shop in Billings only a few months ago, shipped a four-plex to Powers Lake, N.D., and created duplexes bound for Regina, Saskatchewan. The company has an apartment house building in Glendive and multiple accounts from Baker to Williston.

CASS builds its products to suit the building codes for permanent structures in whatever community to which its buildings are headed.

Even businesses that don’t normally target the Bakken market are picking up customers.

“We say we don’t sell singlewides, but we sell a bunch of these little cabins that are right around the $60,000 mark, the cost of a nice, fifth-wheel trailer,” said Jeff Lee, of American Homes. American sells a hunting cabin that’s a super-super insulated single-wide modular home with 6-inch walls and homelike features. “This really is just a souped up single wide, but it has a good look and feel, laminate floors, residential doors and windows and furnaces.”

Lee said American Homes in Billings has sold six of the 560-square-foot cabins since August. Not all of the buildings were Bakken bound, but he expects more will be sold into the oilfield in the future.