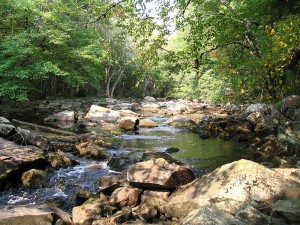 Parks Canada is shutting down camping facilities in Kejimkujik National Park in Nova Scotia after this weekend until next May because of cuts in the last federal budget.

Natalie Fay of Parks Canada said the action is “part of our efforts to reduce the federal deficit,” but she said the changes also better reflect when people actually use the park, the Halifax Herald News reported.

Kathy Perrier is incensed. She began camping and canoeing in Keji with her parents and sister when she was around 5 years old. Thirty years later, she and her husband still have a season pass.

“We love it; it’s a real getaway,” said Perrier, the general manager of a Halifax-area hotel who lives in Middle Sackville.

“For us, it’s the peace and tranquillity, and it’s an easy park to get to. It’s far enough that you feel you’re on vacation and in touch with nature and the animals and the woods — it’s so peaceful — but you can be back to work Monday.”

Perrier is so upset by what’s happening she began an online petition two weeks ago that has over 4,000 signatures. She said she’s surprised by the response.

“Holy smokes, obviously Keji is important to a lot of people.”

Perrier concedes her petition won’t make a difference this year, but she’s sending it to the prime minister and Parks Canada in the hope it will influence people who make those decisions next year.

“I’d like, at least, for them to seriously reconsider this, moving forward.”

People from as far afield as the United Kingdom and Cambodia have signed the petition to keep Keji accessible year-round.

“I think it’s outrageous,” said Chris Miller, national conservation biologist with the Canadian Parks and Wilderness Society, of the cuts to service.

“Mother Nature presents us with a magnificent display of fall colors and what does the government do? It shuts the park down. It’s ridiculous.”

Miller said he doesn’t understand the department’s reasoning when Canada’s national parks are a net contributor to the nation’s gross domestic product.

“Keji is the place where you can escape the hustle and bustle, drop your canoe in the lake and just paddle off to the back country, and now it’s going to be closed for more than half the year.

“Fall colors are coming to a peak right now. You should be able to enjoy that. There’s nothing like a paddle on a cold October morning, looking at the fall colors. It’s quintessentially the Canadian experience.”

Miller stressed that he’s not upset with Parks Canada.

“The underlying problem is their budget was slashed. To fix the problem, you have to restore the funding.”