Biden Visits Calif., Points to Fires as Push for Rebuild 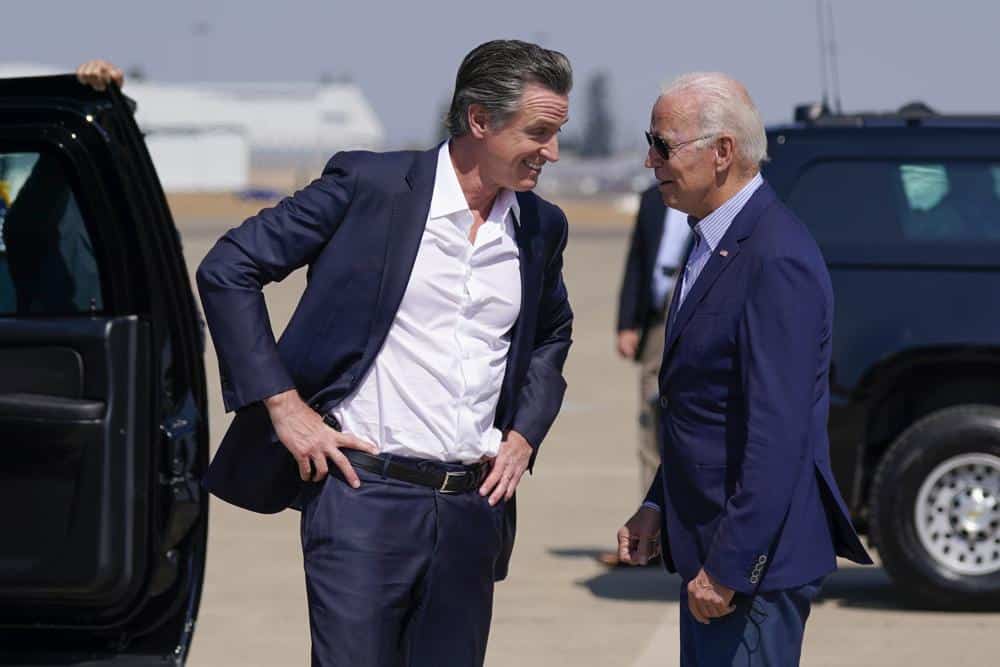 President Joe Biden talks with California Gov. Gavin Newsom as he arrives at Mather Airport on Air Force One Monday, Sept. 13, 2021, in Mather, Calif., for a briefing on wildfires at the California Governor’s Office of Emergency Services. (AP Photo/Evan Vucci)

President Joe Biden on Monday (Sept. 13) used his first Western swing in office to hold out the wildfires burning across the region as an argument for his $3.5 trillion rebuilding plans, calling year-round fires and other extreme weather a climate change reality the nation can no longer ignore, according to The Associated Press.

“We can’t ignore the reality that these wildfires are being supercharged by climate change,” Biden said, noting that catastrophic weather doesn’t strike based on partisan ideology. “It isn’t about red or blue states. It’s about fires. Just fires.”

With stops in Idaho and California, Biden sought to boost support for his big rebuilding plans, saying every dollar spent on “resilience” would save $6 in future costs. And he said the rebuilding must go beyond simply restoring damaged systems and instead ensure communities can withstand such crises.

“These fires are blinking ‘code red’ for our nation. They’re gaining frequency and ferocity,” Biden said after concluding an aerial tour of the Caldor Fire that threatened communities around Lake Tahoe. “We know what we have to do.”

The president’s two-day Western swing comes at a critical juncture for a central plank of his legislative agenda. Lawmakers on Capitol Hill are working to assemble details of the infrastructure-plus plan — and how to pay for it, a concern not just for Republicans. A key Democratic senator said Sunday that he will not vote for a package so large.

In California, Biden took an aerial tour of land charred by the Caldor Fire after getting a briefing from officials at the state emergency services office. Gov. Gavin Newsom, who faces a recall vote Tuesday, joined Biden for the briefing.