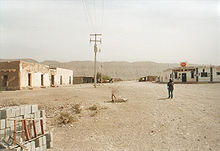 A 2002 view of the village of Bouqillas in Northern Mexico.

On Dec. 21, Customs and Border Protection said the Department of Homeland Security’s final ruling on the opening of the new Port of Entry (POE) at Boquillas in Big Bend was submitted to the Government Printing Office for publication. The POE can officially open 30 days after that publication, the Government Security News reported.

According to CBP, the new official crossing at the Rio Grand River will provide access to Boquillas, Coahuila, as well as the protected areas of Maderas del Carmen, Ocampo and Cañon de Santa Elena in Mexico. It fills a void of a long stretch of border between Presidio and Del Rio where there is currently no port of entry, said CBP.

Local press reports said the area had been an informal border crossing before 9/11, but the U.S. declared all such informal crossings illegal. The closing, said the reports, slowed local economies.

The agency said the decision to open the state-of-the-art border crossing was based on extensive analysis and consultation with its Mexican counterparts.

CBP began the process of opening the new crossing in 2011. In its initial announcement, it said the proposed Boquillas crossing would be a designated Class B Port of Entry– the first on the southwest border since the creation of CBP — which can be used by U.S. citizens, lawful permanent residents, Mexican border crossing card holders, Canadians, and others exempt from certain documentary requirements with approved Western Hemisphere Travel Initiative-compliant documents.

Pedestrians will be able to access the port between 8 a.m. – 5 p.m. Wednesday through Sunday. No vehicles will be allowed to cross, it said.

Individuals entering Mexico from the U.S. who expect to cross back into the U.S. via the Boquillas crossing will be required to have a Western Hemisphere Travel Initiative approved document.

Visitors entering the U.S. will do so in the U.S. National Park Service interagency facility, staffed by Park Service personnel during hours of operation, including when the port of entry is open. Arriving visitors will have access to two kiosks to transmit travel document and identification information to CBP. Visitors will then be interviewed by a CBP officer via a remote link.