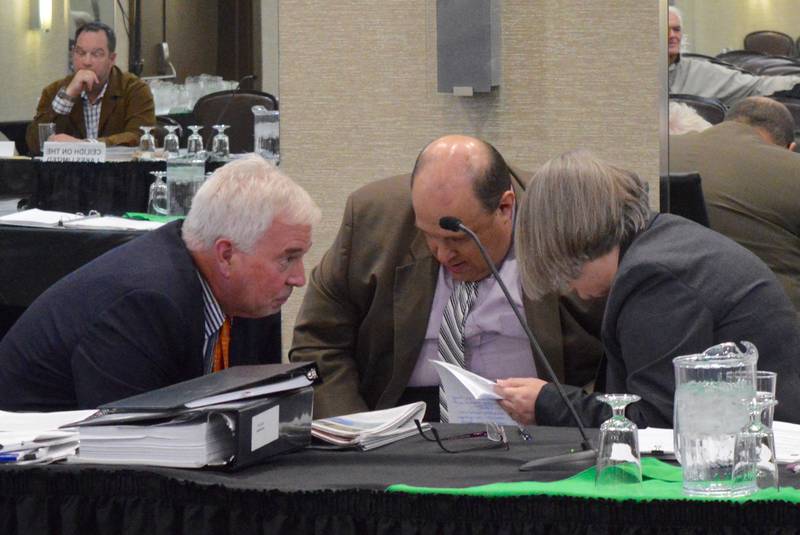 This file photo show the three members of a Nova Scotia Utilities and Review Board that heard last summer's appeal of a CBRM council decision concerning a proposed RV park and campground in Big Pond Centre huddling while discussing a point of order during hearing proceedings last September in Sydney. Chris Skidmore
The developer behind a proposed RV campground on the shores of Bras d’Or Lake in Nova Scotia has given indication he is considering locations other than the originally proposed site, according to the Cape Breton Post.

A recent post on the Facebook page of Chris Skidmore’s Ceilidh on the Lakes venture states that the developer still wants to proceed with the project despite vocal opposition and a regulatory roadblock that has stopped the 211-site RV park from going ahead in Big Pond Centre.

“We are not giving up! We are determined to bring the Ceilidh experience to Cape Breton whether it be Ceilidh on the Lake, on the Coast, or on the Bay,” the May 29 post read.

“We are looking at other options for locations and want to hear from you — our supporters.” The post went on to ask readers to take part in an online poll that asks how far from the Big Pond site they would be willing to travel should the development proceed at an alternate location.

As of late Wednesday (June 12) afternoon, more than 230 people had voted with 70% indicating they would be willing to travel to spend time at the campground. Of those, about three dozen left comments with many indicating that a new RV campground would be a welcome addition almost anywhere in Cape Breton with water access.