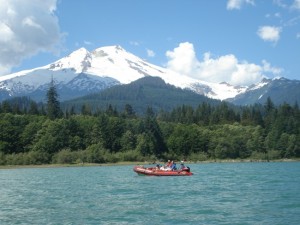 Campgrounds and trails around Baker Lake in western Washington should be full over the next two weekends, as people celebrate the Fourth of July in Mount Baker-Snoqualmie National Forest.

This year, the lake will be even more crowded around the holiday. Sunday, July 1, is the first day of what promises to be the best sockeye salmon season in recent memory, The News Tribune, Tacoma, reported.

This is the third straight year Baker Lake has been open to sockeye fishing, and the biggest run in decades is expected – 35,366 fish, or 30 percent more than last year.

Previous seasons opened after July 4, so forest officials ask campers and anglers to be prepared for even more people and longer waits.

“Without the sockeye season, the grounds are usually full for the Fourth of July week,” said Carol Gladsjo, public services manager for the forest. Because the holiday falls on a Wednesday, campgrounds on the lake should be full both weekends, she said.

“They all kind of come at one time, so patience is what they need,” Gladsjo said.

The four boat ramps on the lake that have parking are all connected to campgrounds. Anglers start arriving as early as 4:30 a.m., and the U.S. Forest Service asks them to respect campground quiet hours, which end at 8 a.m.

Anyone using the three Forest Service boat launches – Horseshoe Cove, Panorama Point and Swift Creek – must pay a $5 day-use fee in the boxes provided. Puget Sound Energy has one launch, at Kulshan Campground, which is free and has the largest parking lot.

To avoid the crowds, the Forest Service suggested fishing on weekdays or waiting until after the first two weekends of the season. Peak arrival time for sockeye is mid-July anyway, according to the Washington Department of Fish and Wildlife.

In recent years, the fish have been arriving in the trap below Lower Baker Dam through mid-August. All returning sockeye are captured in the trap and transported to Baker Lake.