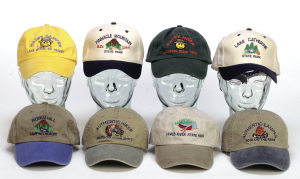 People like ordering food that’s made fresh to order.

But the same logic can apply to the apparel business as well, even to the things like T-shirts and hats.

Styles and colors change. Even the cuts of T-shirts can change.

But campgrounds that order hats and T-shirts from Blue Bay Distributing don’t run into that problem.

“Everything is made print-to-order,” says Cher Cronauer, who has owned and operated the Raleigh, N.C.-based distributor since 1996. “Nothing is done until the customer places the order.”

Blue Bay carries over 80 T-shirt colors and sells more than 700 hat and shirt combinations, usually with embroidered and screen print designs that depict the campground. The company also carries mugs, license plates, patches and other apparel items, including uniforms, aprons and tote bags.

“We sell wholesale to retail shops,” Cronauer said, but only to stores at state and privately owned and operated campgrounds and marinas.

That may sound like a narrow market niche, but Cronauer has more than 3,000 customers. And, despite the sluggish economy, her business is continuing to grow.

And this year is off to a good start. “We may exceed sales from last year,” Cronauer said.