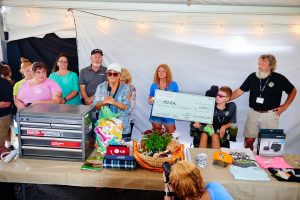 Blue Water Development, a real estate developer, recently hosted the 2017 North East Grand Design RV Owners Rally at their luxury campground, The Resort at Massey’s Landing in Long Neck, Del. Proceeds from the event went to Moment of Peace Adventures (MOPA), a nonprofit which organizes outdoor adventures for children 18 years and under with severe physical disabilities or life-threatening illnesses.

According to a press release, in what became the largest private rally ever held by Grand Design owners, 122 RVs from 13 states drove a collective 27,000 miles to gather for a weekend of fun including educational sessions, guest speakers and family activities. Grand Design Wagonmasters Bob Perciaccante, Patti Stramer, and Bill and Cathy Bergman, chose Massey’s Landing for its central east coast location and extensive amenities.

“Massey’s was the obvious choice for our rally, especially given the amazing support we received from its staff – Massey’s made absolutely everything happen,” said Perciaccante. “It also happens to be my family’s favorite campsite.”

The organizers selected MOPA as its charity beneficiary, not only due to Blue Water’s previous work with the organization, but also because its cause is close to Perciaccante’s heart.

“My son has Down Syndrome, so MOPA’s mission resonated strongly with me and we wanted to do something extra special for the kids,” he said. “MOPA is a wonderful organization and we are grateful that Massey’s introduced us to them.”

During the check presentation to MOPA, Blue Water Co-owner, Todd Burbage, unexpectedly announced that he would match Grand Design’s donation. 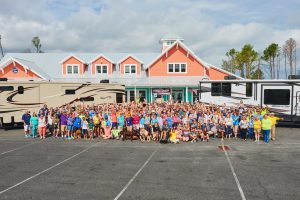 “MOPA is very close to our hearts at Blue Water,” Burbage said. “They’ve been coming to Massey’s Landing for a few years and we want to be sure their kids get the trips they deserve.”

When all was said and done, proceeds raised through ticket sales and donations from Grand Design, Delmarva RV, rally participants and Blue Water eclipsed $10,000, enough to fund a young cancer patient’s fishing trip and kick-start funding for a future hunting trip as well.

Taking stock of the amazing weekend, Patricia Ilczuk-Lavanceau, Massey’s Director of Sales, said, “We love our property, our jobs, our guests and Moment of Peace. I am glad to call MOPA not only a partner and beneficiary of Massey’s, but also a true friend.”

The organizers plan to host the 2018 North East Rally at Massey’s, with over 130 RV owners booked already.

“There’s no question we’ll return to Massey’s next year,” said Stramer. “Our rally wouldn’t have been the huge success it was without Patricia and her staff. I’m proud of the weekend we put together for our owners and even prouder of the donation raised for MOPA.”