Book Early Or Lose Out At Florida Campgrounds 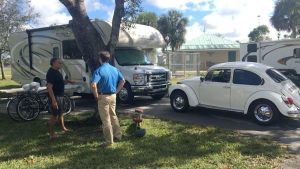 At John Prince Park in Lake Worth, Fla., would-be campers are routinely turned away because there is no space.

At C.B. Smith Park in Pembroke Pines, you have to call a year in advance if you plan to stay over for an extended period in an RV, according to The Sun Sentinel.

Camping in recreational vehicles is making a big comeback from its peak in the 1970’s, industry leaders say, with both retirees and millennials getting into the RV lifestyle. Approximately 500,000 vehicles were shipped to dealers nationwide in 2016, the most recent figures available.

“We are seeing record levels of sales everywhere and the result is that more campgrounds are full,” said Kevin Broom, spokesman for the Recreational Vehicle Industry Association, based in Reston, Va. “This is the new heyday.”

In South Florida, there are approximately a dozen parks that offer RV and tent camping, and most are at or near capacity and have waiting lists. The revenues earned at those parks has been gradually rising since the end of the recession, according to officials who oversee the parks.

The allure of nature, the ability to take along pets and the $40 nightly costs at most parks are big draws for many people.

The visitors come mostly from Canada and northern U.S. states, but some come from Europe and rent the RVs. There are also locals who are seeking a quiet getaway that does not require much travel or money.

The parks offer a variety of amenities, with some providing a driving range, batting cages and tennis courts to playgrounds, trails and water activities.

Terri and Jim vomSaal lived in Cooper City for 25 years before using their 43-foot Gulfstream Tourmaster to shuttle between Alabama, Arizona and Broward County.

They parked at C.B. Smith, but are being forced to move soon.

“You just gotta make reservations a year in advance. We didn’t do that so we have to go to another park and then come back when a space opens up again. That’s what a lot of people do,” Jim vomSaal said.

“It beats Alabama, it’s still cold up there,” he added.