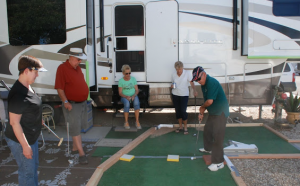 There already have been sightings of vehicles in Yuma, Ariz., with out-of-state license plates from places like Washington, Oregon and other northern climes.

They herald the start of the annual winter season, when thousands of people from up North migrate to Yuma to bask in the sunshine, preferring shuffleboard for their activity of choice over shoveling snow, the Yuma Sun reported.

Last winter, slightly more than 80,000 winter visitors descended on Yuma. That’s fewer than in some years but still a big temporary increase to Yuma’s population and an infusion of an estimated $600 million to the local economy, Jon Heidrich told the audience at the Oct. 18 meeting of Know Yuma Inside and Out.

Heidrich, who owns and operates Shangri-La RV Resort with his family, was one of the speakers for the monthly business forum that focuses on various elements of the local economy.

The typical winter visitor is a retired blue-collar worker or farmer coming to the Southwest to get out of the cold, Heidrich said.

“We fondly refer to them as the Old Guard. They’re happy to get a reasonable place to stay and sunshine.”

But things are changing, he said.

And they’re reaching retirement age by the millions every year. As they do, they want it all, Heidrich said.

They want a busy and active lifestyle from swimming and tai chi, to hiking and scuba diving. They want to be entertained and they’re very much into volunteering, Heidrich said.

And if you think shuffleboard is a game for the Old Guard, think again, he said. Four couples who stay at Shangri-La helped put on an international shuffleboard tournament in Seattle that drew people from 11 countries, with a whole division for those 17 and younger.

The challenge for Yuma is how to attract the emerging winter visitors to Yuma and then get them to stay, Heidrich said. They’re on the Internet, and a Facebook presence is a must for park owners, he said. And good service is key.

“The first thing,” said Mac McCann, director of operations for Palms RV Resort, “is get to know your customer. The ‘boomerbird’ is different from the ‘snowbird’ with their demands and expectations.”

They have every intention of enjoying their retirement, and many of them are getting a head start with long vacations in the cold winter months, he said.

They’re also a more affluent group. McCann noted that last year, 50% of the Palms RV residents were in motorhomes valued from $150,000 to $2 million.

Most visitors today also are looking to buy property, not rent their lot, seeing the real estate as a long-term investment.

McCann agreed with Heidrich that the new wave of winter visitors is looking for activities and entertainment. And the resort delivers with a series of concerts by professional entertainers and a jam-packed 26 weeks of 200 diverse events, activities and classes from jewelry design to music lessons and sailing, along with fitness programs and a spa that stays busy all day.

He also noted that 70% of winter visitors travel with their pets. “These are their kids. A pet-friendly park is a happy park.”

Both Heidrich and McCann said many of their customers are from Canada.

At Shangri-La, 26% of the visitors are from Canada. The next largest group, said Heidrich, are those from Arizona and California who are passing through and stopping to spend the night. The remainder come from northern states and even Texas.

At Palms RV Resort, 95% of the lot sales are to Canadians. “I’m going after every Canadian I can until the economy recovers,” McCann said.

He also sees opportunity for Yuma to attract the small-town retirees who find Mesa too congested and Palm Springs too “plastic.”

Know Yuma Inside and Out is a monthly business forum series sponsored by the Yuma Sun in partnership with the city of Yuma, Yuma County Chamber of Commerce, Yuma Visitors Bureau and Greater Yuma Economic Development Corp.