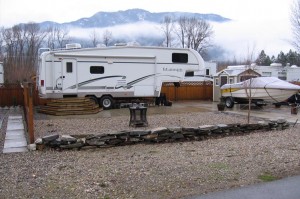 One of the RV sites at Gateway Lakeview Resort in British Columbia.

A proposed expansion at an RV resort in a picturesque area of British Columbia was soundly rejected, potentially setting the stage for a legal fight at the resort, the Kamloops Daily News reported.

Directors on the Columbia-Shuswap Regional District (CSRD) voted unanimously to reject a plan to allow about 90 more recreational units at Gateway Lakeview Resort, at Lee Creek.

CSRD planners agreed to bring the 300-unit proposal to the board at a public hearing after the company filed a lawsuit in British Columbia Supreme Court seeking to affirm a right it said was granted by the province, before the CSRD had any planning rules.

“I expect we’ll be going to court at some point,” Denis Delisle, the area director for the North Shuswap said following the hearing.

Without the zoning, the company cannot build amenities, including a pool, washrooms and laundry facilities for RVs. About 90% of current RV units are sold in the 211-unit first phase, along with seven cabins.

The proposal would have also seen the current owners’ shared interest in the development be converted into strata title. Delisle said conversion of title isn’t the problem for the board; it’s the increase in density.

“The big concern for them (CSRD board) was the official community plan was just done and this (expansion) was going against it,” Delisle said.

The expansion would have also increased the amount of treated effluent going into the lake.

“It’s a big defeat,” he said. “Gateway will have to take it to the residents and come up with a plan people will support, or they’ll do the court thing.”