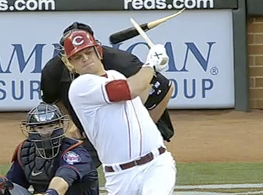 A scary moment for any baseball umpire happened June 22 to home plate umpire Jerry Layne as he was calling balls and strikes for the Reds/Twins game. In the fourth inning, Reds hitter Devin Mesoraco was at the plate and broke his bat attempting to get a hit off Minnesota pitcher Nick Blackburn. Layne was in the wrong place at the wrong time as the head of the bat bounced off his mask/head and sent him tumbling down to the ground from the impact. After the game, Layne was taken to the Good Samaritan Hospital in Cincinnati for examination and all tests came back negative.

Minnesota Twins pitchers wound up and broke 170 of their opponents’ bats this past season, and that is good news for Minnesota state parks and trails, because it means 17,000 trees are coming their way.

Every broken bat scores 100 trees for the Minnesota Department of Natural Resources (DNR), as a result of its “Break a Bat, Plant a Tree” partnership with the Twins, now in its third year. The trees will be planted next spring at locations yet to be determined by the DNR, according to a press release.

“The Break a Bat, Plant a Tree partnership has been a lot of fun, and the 17,000 seedlings we’ll be planting will go a long way toward helping with reforestation efforts in areas where disease, farming and severe storm damage have wiped out large numbers of trees,” said Courtland Nelson, director of the DNR’s Parks and Trails Division. “The Minnesota Twins should be very proud of the legacy they are leaving, a legacy that will benefit Minnesota state parks and state trails for generations.”

“The Twins have been proud to partner with the DNR on this program since 2010,” said Patrick Klinger, Twins Vice President of Marketing. “We look forward to continuing Break a Bat, Plant a Tree and to improving our state parks and trails for all Minnesotans in the years to come.”

In total, 51,800 trees will be planted on Minnesota State Parks and Trails as a result of this partnership.

The Minnesota Twins organization believes our future success-both on and off the field-is built on a business model that embraces operational efficiency, environmental stewardship and social responsibility. We honor the power of sport by leading through example, and we will continue to use sport to inspire, build the best fan experience and cause no unnecessary harm, working with our fans, community, suppliers, partners and employees to have a positive influence in the world.