By: Woodall's Campground Magazine|Published on: May 31, 2016|Categories: Industry News| 0 comments 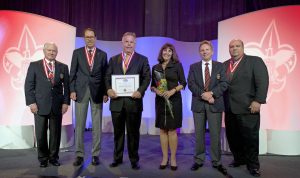 Jim Rogers, former chairman and CEO of Kampgrounds of America Inc. (KOA), received the Boy Scouts of America (BSA) Silver Buffalo Award on Friday (May 27) at the close of BSA’s 2016 National Annual Meeting in San Diego, according to an announcement from KOA.

Rogers was presented with the esteemed award during a ceremony honoring BSA volunteers throughout the organization. He now joins the ranks of other influential Scouters in the Silver Buffalo family, including Neil Armstrong, Bill Gates, and 14 U.S. presidents.

BSA’s Silver Buffalo Award is the organization’s highest honor for adult members and has been given annually since 1926 to civic-minded men and women for their invaluable contributions to Scouting. Recipients’ service must be national in scope and can be independent of, or directly through, the Boy Scouts of America.

As a national board member of KOA Care Camps for Kids, Rogers has helped raise more than $10 million to help young cancer patients and their siblings enjoy camping and outdoor experiences. He has also forged partnerships with organizations such as Cabela’s; the Children’s Oncology Camping Association, International; and the Recreation Vehicle Industry Association in order to serve more children.

Rogers is also a Distinguished Eagle Scout and Vigil Honor member of the Order of the Arrow. In addition to his most recent honor, Rogers has also received BSA’s Silver Beaver and Silver Antelope awards.

Both Rogers and his wife, Sandy, are past presidents of the Nevada Council of Boy Scouts of America.