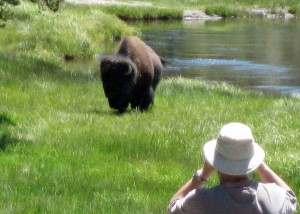 A close encounter in June between a visitor and a bison in Yellowstone National Park made international headlines. But for the man who was badly injured, the experience taught him that it’s not just wild animals that can be capricious and brutal, but also reporters and online commenters, the Yellowstone Gate, Cody, Wyo., reported.

Robert Dea of Newbury, Mass., had planned a two-week sumer vacation to Yellowstone and a Montana guest ranch with his wife and their friend. But he ended up spending eight days in the hospital instead after being tossed around by a bothered bison.

Press accounts of the incident were featured on the Drudge Report and other high-traffic websites, spawning a series of sensational stories and online comment threads that Dea said were misinformed and hurtful.

But Dea, in his mid-50s, said he hopes his tale can serve as a lesson to others about keeping their distance from wildlife. He shared written details of his encounter via email after returning home.

“Parks like Yellowstone are not a petting zoo,” Dea wrote. “I have learned my lesson, and I hope many others will learn from it too.”

Dea had visited Yellowstone before, and said he hopes to return to the park, which he sees as an important natural habitat for bison, bears, wolves and other animals.

While he faults himself for not getting out of the animal’s way, the incident didn’t happen because he got too close while taking photos. It was just the result of a misperception that staying put was the safest option.

Dea and his party were driving near the Norris campground on June 23 when they spotted a lone bison near a river. So they pulled over to watch, along with a group of about six others, he said.

“Nobody was any closer to the beast than about 50 feet, but the bison must have decided too many people were around, and began ambling up a small path that was his means of egress from the river,” Dea said. “Unhappily, this path went right past the log on which I was sitting.”

Dea had spent time around cattle before and hadn’t found them threatening. He also knew that a hasty retreat was unwise around bears, so he didn’t know what to do as the bison approached. He also didn’t realize he was sitting along the trail the bison would take away from the river.

“The only bison I had ever been near before had been docile and behind a fence, so I (naively) had no gut fear reaction happening,” he said. “So I stayed in my place, expecting that the fellow would just pass me by.”

That’s what happened, and just after the bison passed him, Dea recalls saying something like “You be a good boy now,” and looking away as he stood up from where he had been sitting on a log.

“This is the last thing I remember from that day,” he said.

His companions witnessed the whole incident, and saw the bison wheel around quickly and butt Dea in the lower back, sending him flying at least 10 feet into the air. He landed on his left shoulder, suffering a torn groin, broken shoulder blades and several broken ribs.

“The bison meanwhile turned back up the path and ambled off, exiting the scene and my life,” he said.

Dea’s wife thought he was dead at first, but park rangers administered first aid and he was flown by helicopter to a hospital in Idaho Falls. He spent eight days in “a pain-filled haze” before moving to a hotel for three more days of recuperation, returning home on July 4. Dea said he got good medical care, and insurance covered most of the bills, which he described as “enormous.”

“I was surprised that this incident was reported so widely, not only in the United States press, but even in Europe, Australia and South America,” he said.

One British tabloid drew from a Yellowstone news release to create a poorly written account “in which every sentence contains at least one falsehood,” Dea said.

Some who posted online comments assumed he was trying to get a photo, but he was just watching through binoculars. Others falsely assumed he had provoked the animal, and a National Park Service news release erroneously reported that he was pinned to the ground by the bison, Dea said.

But mainly, Dea was annoyed by online comments that were “rude, insensitive, and ignorant,” he said.

“Maybe the park service needs to quit rescuing people who do this, and let natural selection work,” one commenter posted on YellowstoneGate.com. “What’s the record for the annual goofy tourist toss? 10 feet seems low,” another commenter posted.

But Dea said he is glad his misfortune became a viral Internet sensation.

“That is a good thing, because there is no amount of signage or ranger service bulletins that can inform the public to the danger of close contact with wildlife in the way a story like this can,” he said.

“I was handed a park newsletter on the way into the park that had warnings and information that was pertinent to what happened, but I had not read any of this prior to my accident. I’m not sure any further public education or activity by the park service would have prevented this accident in my case,” he said.