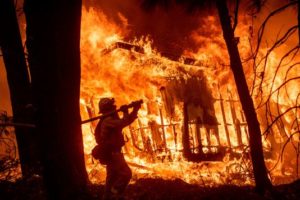 A building is consumed by California’s Camp Fire.

Editor’s Note: This column was written by Joanna Allhands for the Arizona Republic.

If you’re like me, you watched the destruction caused by California’s most recent spate of wildfires and shuddered at a harsh reality:

That could be us.

Arizona’s 2018 wildfire season was not one for the record books. But we have seen our share of devastation. Millions of acres burned in less than two decades. Towns heavily damaged. Lives lost.

The potential for even worse calamity increases with every year we add to this drought. Despite our best efforts to thin the forests and urge people to remove the extra vegetation near their homes, the space where wilderness and civilization meet is growing, waiting perilously for that one spark to turn huge swaths of Arizona into scenes from Hell.

It’s not a matter of if it’ll happen, but when.

And while we know what needs to be done, thinning the forests and lowering the risk for communities has proven much harder than it looks – partly because of how much forest there is to thin and how little industry there is remaining to do it, and partly because more people are building in areas that could previously burn without endangering life or property.

In California, a celebrity-fueled blame game has emerged from the ashes of the deadly Camp Fire, where President Trump tweeted the blame on forest mismanagement and musician Neil Young said it was climate change. Factions are bitterly arguing either side, with several media outlets pointing out that California’s most recent blazes are occurring in suburban areas, not overgrown forests.

There is truth on both sides of the debate for Arizona. We have kept heavily wooded areas from burning for far too long, allowing decades of overgrowth to pile up. When a fire starts, it’s not the healthy cleanser it was in the past. Small trees that ring the older, larger ones wick flames into the canopy, creating bigger, hotter, more unpredictable and far more devastating fires.

The forests aren’t recovering as we once knew them. Ponderosa pines aren’t growing back in charred areas like they were before. Lower-elevation trees are creeping into that space.

Why? Because it’s hotter and drier than it was before, and trees are seeking relief in higher, cooler places. At the same time, climate change is making fire seasons last longer, stretching limited resources to keep people safe.